Days after IAS topper Tina Dabi announced her engagement with fellow civil servant Dr. Pradeep Gawande, a wedding reception card has gone viral on social media. According to the viral wedding invitation card, the reception is scheduled to be held this month in Jaipur where both Tina and Pradeep are currently posted. 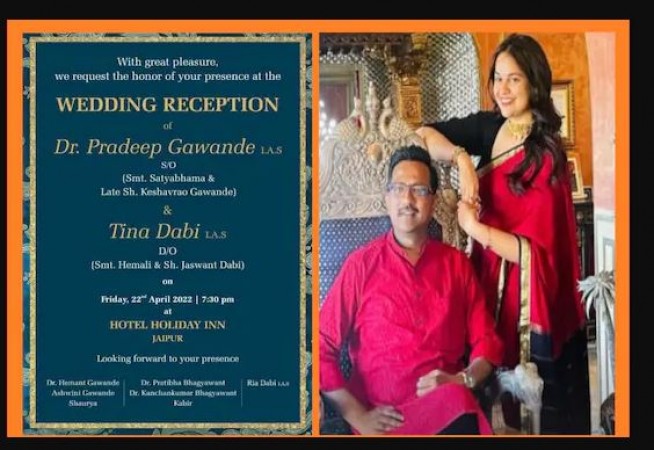 One of the invitees stated on the card is Tina’s younger sister Ria Dabi, who too has become an IAS officer after securing an all-India 15th ranking the UPSC exam.

Tina had recently opened up about her decision to choose Pradeep as her second husband. Tina had said that Pradeep belonged to the same Dalit sub-caste as that of her mother adding that another similarity between her future husband and mother was that both had their roots in Maharashtra.

Pradeep is senior to Tina by three years in the civil service but older than her by 13 years. Reacting to the debate over the huge age gap, Tina had said that age could not be a deciding factor in matters as important as marriage. “Temperamental, compatibilities, cultural factors and mutual understanding are way more important,” she had said.

Tina and her first husband Athar Aamir Khan separated through a mutual divorce last year after being in marriage for two years. She said the divorce process was a painful experience but spending time in work and with family helped her come out of the trauma. “Divorce is a painful experience, it drains you emotionally. I kept myself busy in work spent time with my family to come out of that difficult time,” Tina was quoted as saying by Dainik Bhaskar.