There is not a single day that goes without Arnab Goswami or members of India’s lapdog media not disgracing the profession of journalism. On a day a woman editor of Times Now was seen smiling at pro-BJP Kangana Ranaut calling veteran actress Urmila Matondkar a ‘soft porn’ star, a video of Arnab Goswami yelling at Salman Khan using disparaging words went viral. This prompted many to condemn the controversial anchor, while others said that this was just the beginning of a future when the ‘Republic TV-Bigg Boss crossover episode’ would become an acceptable phenomenon. Others were quick to highlight his hypocrisy by reminding Goswami about his previous claims of being a ‘big fan’ of Salman Khan. 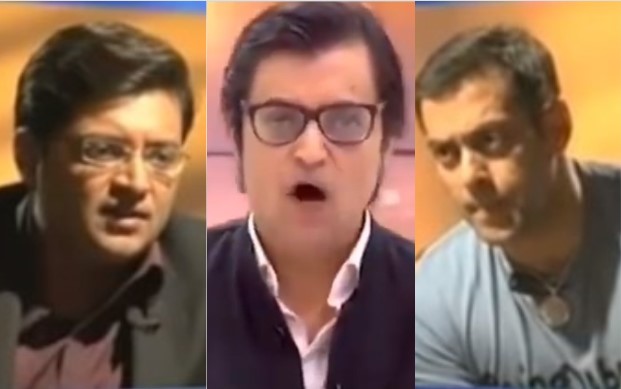 Launching an extraordinary rant against Salman Khan, the Republic TV founder said, “Where’s that Salman, who used to talk so much? Where is he hiding? Why does he not raise a single voice against the drugs mafia? … I am asking this question by naming Salman Khan. Where are you, Salman Khan? Not a single statement or tweet. Why are you silent on the entire episode of Disha Salian? Why are you silent on the murder of Sushant (Singh Rajput)? Which city are you in Salman? Which country are you in Salman? You are a person, who speaks against the pulse of the nation. You will read the dialogues of Bigg Boss when they are written for you by others.”

As expected, Goswami began to face the wrath from netizens for his attack against Salman by dragging him to the Sushant Singh Rajput’s death case.

Arnab Goswami yelling at Salman Khan is a sign of things to come. We better brace ourselves for a Republic-BiggBoss crossover episode. https://t.co/esrZdnWMWj

Arnab Goswami has earlier blamed so many big celebrities just to gain TRP and now he is trying to blame Salman Khan for TRP You fucking dog of modi go and lick his ass you will get some money but if you will spread unnecessary hate then you will ge abuses.#TRP_का_दल्ला_चरसी_अर्नब

Some Twitterati dug out an old interview of Salman by Goswami when the latter worked for Times Now. In that interview, Goswami was seen expressing his awe for the Bollywood actor. In his intro, he had said, “Thanks for giving me time Salman, each time speaking to you is an absolute pleasure. I am a total fan.”

In that interview, the ‘fan’ Goswami had showered praises on Salman Khan. He had told Salman how many people tried to copy him but no one was able to match the success of the Dabangg actor.

Salman Khan has been a popular face of Colors TV reality show, Bigg Boss, which he’s been hosting for many years. Colors TV recently unveiled the video of the upcoming edition of the reality show.