A known Hindutva thug, who called for the boycott of Qatar Airways with poor English, has had his Twitter account suspended. Rattled supporters have now stopped tweeting under the original trend #BycottQatarAirways and have started using a new trend pleading the social media platform to restore his account. 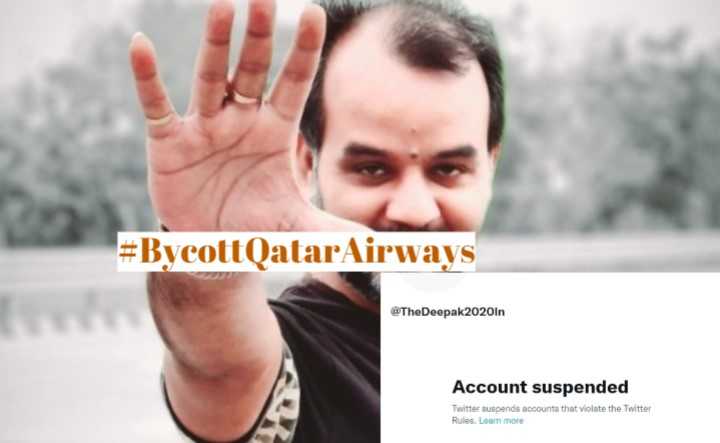 Deepak Sharma had given a call for the boycott of Qatar Airway after the Islamic kingdom registered an official protest over the insulting remarks made about Prophet Muhammad (PBUH). Qatari Emir has also cancelled his scheduled dinner with the visiting Indian Vice President Venkaiah Naidu to protest the insulting remarks made against Prophet Muhammad by Nupur Sharma, a member of Prime Minister Narendra Modi’s BJP.

Qatar had also summoned the Indian ambassador to register its protest. The ruling BJP then announced that it had suspended Sharma from the primary membership of the party.

The Hindutva thug on Monday launched a trend #BycottQatarAirways against the steps taken by the Qatari government. He became a butt of social media jokes for using the wrong spelling of ‘boycott.’ But, his bigger embarrassment came in the form of the suspension of his Twitter account. It’s not clear if the decision to suspend the known Hindutva thug’s account was linked to his call for the boycott of Qatar Airways.

But the development appeared to have rattled his supporters as they stopped posting tweets under the original hashtag on Qatar Airways. They are now frantically tweeting to have the thug’s Twitter account restored.