Fans of late Sushant Singh Rajput on Wednesday reacted angrily against two of India’s biggest e-commerce brands namely Amazon and Flipkart by trending #BoycottAmazon and #BoycottFlipkart on Twitter. This was after Sushant fans alleged that both e-commerce brands had joined together to launch a smear campaign against the late actor. 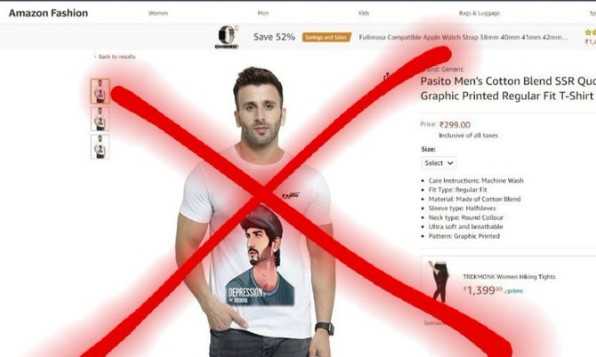 What appeared to leave Sushant Singh Rajput fans angry was the viral images of T-shirts being sold on Amazon and Flipkart with the late actor’s photos. Both e-commerce platforms were seen selling identical T-shirts with Sushant’s image on them.

The message underneath Sushant’s image read, “Depression is like drowning.”

This, according to Sushant fans, appeared to give credence to the suicide theory that Sushant had indeed ended his life after suffering from depression. Sushant fans have always alleged that their screen idol was murdered by the Bollywood mafia.

Here’s why they reacted.

This Smear Campaign can’t go on.

Seems like Amazon manager is in Depression. I am sure bollywood is behind this propaganda especially my doubts are on Chrasi Padukone.

Ashamed of this Brands who defame a person & hurt people’s sentiments..#BoycottFlipkart #BoycottAmazon

Bollywoodians has
“Depression is like Drowning” not our Sushant had, mind it❗

Some of the angry fans also threatened to uninstall the mobile apps of Amazon and Flipkart. These em-commerce platforms have not reacted to the widespread outrage yet.

Sushant’s body was found in his apartment in 2020.