Arnab Goswami’s business partner and BJP’s Rajya Sabha MP Rajeev Chandrasekhar has found himself in an embarrassing situation after a former woman employee has publicly shared her allegations of being sexually abused by his aide Abhinav Khare. 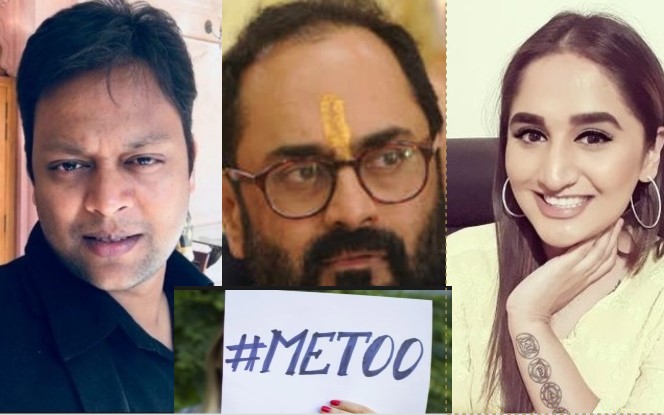 Sonam Mahajan took to Twitter to share her experience on working as a consultant at one of the offices of Chandrasekhar in Bengaluru. Mahajan, who championed the right-wing Hindutva cause on social media, joined Chandrasekhar’s Namma Bengaluru Foundation, an NGO, as a consultant in October 2017 on a one-year contract.

Last Sunday, addressing her followers on Twitter Mahajan wrote, “I thought you all should know where have I been and what have I been going through. Going to put a series of tweets on how am I being hounded and humiliated for last 1.5 years for speaking up against a rich and powerful monster who sexually harassed me and got found guilty of it.”

Mahajan said that she was sexually harassed at ‘Chandrashekhar’s office’ adding that the latter’s ‘Chief of Staff’, one Abhinav Khare, ‘sexually and mentally’ harassed her ‘from the day one.’ “I took no time to report it, first verbally and then in written to Rajeev. Soon a committee was formed to investigate,” she added.

She said, “Soon after filing the complaint, everyone at office stopped talking to me and no work was being allocated to me. Owing to such a hostile work environment, I was forced to go on a leave while Abhinav Khare (Rajeev’s chief of staff) kept coming to office and using his influence.”

Mahajan wrote that even though the inquiry into her sexual harassment claims was to be completed within three months, as per the legal mandate, it stretched to June 2018, when the committee reportedly found Khare guilty of sexual harassment.

She wrote that even after Khare found guilty and asked was to tender a written apology, the committee made adverse observations about her social media interactions with people who she disagreed with. She wrote, “During the inquiry, Khare kept trying to influence the committee by quoting that I was a communal bigot & even had a tiff with Ajaz Khan. You all know how Ajaz abused me on twitter for my pro-Modi views. It was nothing personal. In fact, a BJP neta filed a complaint against him.”

She says that she asked the committee to remove the references made to her ‘banter’ on social media, but to no avail. Mahajan alleged that ‘Rajeev Chandrashekhar’s org was now using them to blackmail me to settle the matter amicably.’ “Next three months, July, Aug, Sep 2018, the organisation kept forcing me to come to the same office as Khare and did nothing to implement committee’s recommendations against Khare. How could I go back to the same hostile work environment where my harasser still works?” she added.

Mahajan said that while she insisted for a written apology from Khare and removal of negative observations from the internal committee’s report, a BJP MP approached her with an offer of mediation. But when she told him that she did not want any financial compensation and was only determined for an apology from Khare, the MP said that he ‘will get back’ to her.

“He soon got back to me saying that the company is ready for everything except for having Khare give me a written apology as I may share it with the media (evidence available). I assured him that I am a principled woman, fighting for my honour and have no such intentions,” Mahajan wrote adding that ‘another top BJP neta discouraged me from filing an FIR by saying that a slew of cases were coming my way. It was a subtle intimidation.’

The ex-parte injunction was vacated on 8 March this year, allowing Mahajan to speak about her ordeal on public platforms. Meanwhile, she had also filed a criminal complaint with the Bengaluru Police, but the cops filed a ‘B-Report’ meaning they failed to detect any crime against Khare.

I thought you all should know where have I been and what have I been going through. Going to put a series of tweets on how am I being hounded and humiliated for last 1.5 years for speaking up against a rich and powerful monster who sexually harassed me and got found guilty of it.

Mahajan said that she ‘literally have no life today’ because she spends ‘most of my days running to lawyers, courts, police.’ “Please keep all this into account before you tell women to speak up cuz when they do, they are treated like untouchables. And it’s hard to fight it alone. It’s really really hard,” she concluded.

Khare, for his part, too took to Twitter to counter Mahajan’s allegations. Accusing the Congress of paying Mahajan to run a ‘smear campaign,’ Khare said that there was no question of an apology as he was determined to fight the matter in the court. He wrote, “I have been harassed, defamed and extorted by this blackmailer for 1.5 years now but I am persistent in following the case through our judicial system. Forget about apology, I’ll fight this in the court till sun shines on the truth. Will upload my detailed statement later.”

Khare also shared what he termed was the copy of the internal committee’s observations on Mahajan. He wrote, “Committee’s observations about her: complaint to delay her termination, Bad moral character, vengeful attitude twrds other women colleagues, vulgar language, no interest in work, taking free money, she tried via mentor to negotiate financial extortion, she is a habitual offender”