Fans have threatened to unfollow Raveena Tandon for a video featuring Saif Ali Khan and Aamir Khan despite advance apology weeks after she faced police complaints with Farah Khan and Bharti Singh from The Kapil Sharma Show. Raveena has had to face plenty of grief after a series of police complaints were filed against her, filmmaker-choreographer Farah Khan and Bharti Singh of The Kapil Sharma Show for hurting the religious sentiments of the Christian community. Though, the three celebrities have received temporary reprieve from the Punjab and Haryana High Court, Raveena appears to have learnt her lesson from the episode. This was evident in a recent hilarious video that she shared on Instagram. Not willing to face another round of legal action or public backlash, Raveena issued a profuse apology in advance making it abundantly clear that she did not intend to cause ‘religious, political and physical’ hurt to anyone through this social media post. 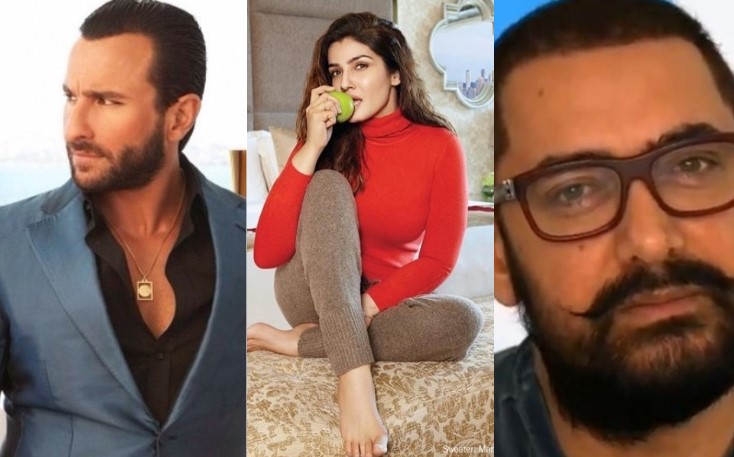 While sharing the hilarious video, Raveena wrote cheekily, “‪Ok so I found this hilarious! ??? Crediting – who ever made this. Disclaimer- Not intended to hurt any religious political or physical feelings. No animals were hurt while posting this ! #parampara ?@neelamkotharisoni #SaifAliKhan ‬#amirkhan.”

The video was a compilation of scenes from the song Aadhi Raat Ko from her 1993 film Parampara also featuring Aamir Khan. Saif Ali Khan, Neelam and Ashwini Bhave. However, the song was cleverly mixed with the audio of Go Corona Go made famous by Union Minister Ramdas Athavle, who had to face public wrath for making fun of a serious global pandemic.

Her post came hours before Indians were expected to turn off lights at 9 PM on 5 April for nine minutes in their homes as desired by Prime Minister Narendra Modi. The title on the video said, “Bhakts (followers of PM Modi) on 5th April 9 PM.”

‪Ok so I found this hilarious! ??? Crediting – who ever made this. Disclaimer- Not intended to hurt any religious political or physical feelings. No animals were hurt while posting this ! #parampara ?@neelamkotharisoni #SaifAliKhan ‬#amirkhan

Many Modi supporters found Raveena’s post in poor taste with some even threatening to unfollow her. Raveena had perhaps preempted the backlash as was evident in her advance apology. One wrote, “Seriously? You making fun of this sitting from the comfort of your home? Shame on you. Unfollowed.” Another commented, “Unfollowing you on this. You should understand the seriousness of the situation.. such post from you not acceptable.”