If you wonder why the hashtag #TheKapilSharmaShow has been trending on the internet, that’s because Kiku Sharda and Krushna Abhishek decided to play the characters of Arnab Goswami and his colleague Pradeep Bhandari in their newly created Raddi News (Garbage News) segment on Sunday night. The teaser video of the show had created enough frenzy for fans to desert the IPL match to tune into the popular Sony TV show. 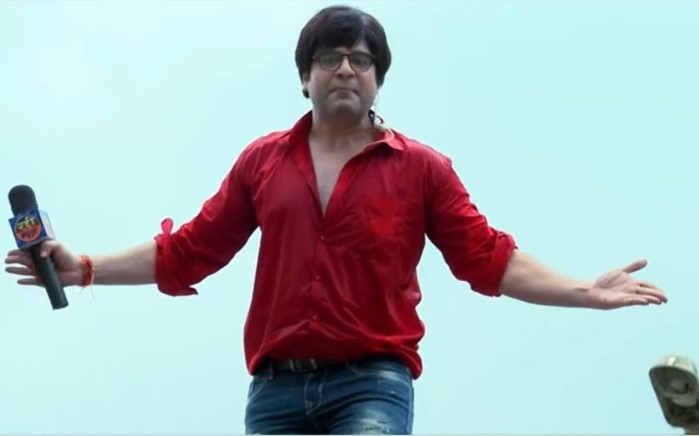 Aside from Kiku Sharda mocking Republic TV founder Arnab Goswami, Krushna Abhishek was seen playing the character of one Pratham Kumar, which many believed was a clever dig at Pradeep Bhandari, one of Goswami’s colleagues. In his character of a mic-wielding reporter Pratham Kumar, Krushna was seen trying to enter a vanity van of a Bollywood actress. However, when he was denied entry into the vanity van, he decided to climb up to the roof of the vehicle to monitor the breathing movement of the actress in question.

He was heard saying, “Breaking news. The vanity van people are also involved in the conspiracy hatched by the actress. But this Pratham Kumar will risk his life to bring out the truth.”

A post shared by Sony Entertainment Television (@sonytvofficial) on Oct 4, 2020 at 3:31am PDT

When his cameraman refused to accompany him to the roof of the vanity van saying that he was acrophobic, Krushna as Pratham Kumar shouted, “Breaking news. Our cameraman too is complicit in the conspiracy hatched by the actress.”

His next lines were even more hilarious as he said, “As you can see that I can’t see anything, but I can say with full conviction that the heroine is inside the vanity van…I can hear her breathing from here.”

This is first time since we watch #TheKapilSharmaShow over IPL, and it was worth watching. Amazing thing is that today Kapil & co not only trolled Arnab(Drugs do Wala) but also he takes on ‘Lord’ Pradeep bhandari. Isey kehte hai ek tir se 2 nishana?. Masterpiece ?

There were many funny moments in the Sunday night’s episode of The Kapil Sharma Show. On one occasion, Kiku cracked everyone up by saying, “We will never quit the company of truth even if it means turning our studio into a mental asylum.”

One of the best moments came when Kiku Sharda playing the news anchor of Raddi News told filmmaker Anubhav Sinha, “Personal attack on media.” Far from receiving any sympathy from him, Anubhav Sinha taunted, “Who’s media here? You?” This left everyone including Archana Puran Singh in splits.