In a dramatic turn of events, a group of angry protesters on Tuesday attacked a yoga event organised by the Indian embassy in the Maldives. The police had to fire tear gas to disperse the crowd. 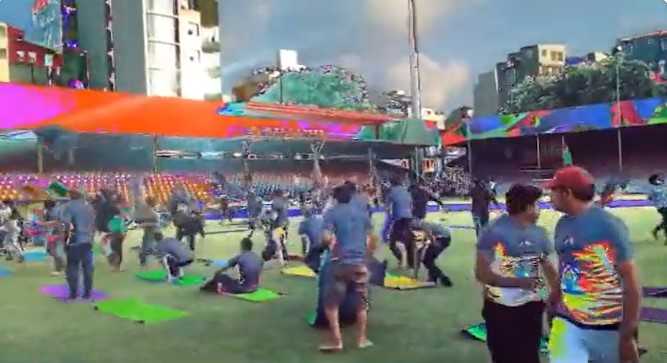 The yoga event was being organised by the Indian embassy at a stadium in Male when a group of angry protesters stormed inside the stadium. There were around 150 participants including some diplomats.

In the viral video, frightened participants scurried for protection.

This came hours after a group of other protesters displayed placards saying that yoga was against the tenets of Islam.

Islam is the official religion of the Maldives. However, there has been an alarming rise in anti-India sentiments in the Maldives, a group of islands in the Indian Ocean with a population of about half a million, in recent years. The recent Prophet controversy had evoked reactions from the local population, who view the current BJP government led by Narendra Modi as an enemy of Islam.

Superintendent of Police Fathmath Nashwa told Reuters that his force responded with anti-riot measures and later used pepper spray and tear gas to control the crowd.

The Indian embassy has not responded to the attack.