A controversial programming headline by Hindi TV channel Aaj Tak has prompted a Twitter user, known for his witty tweets, to cause hashtag #NoidaFilmCityExcavation trend across India. This was after the anonymous Twitter user cooked up a story claiming that underneath the media offices in Sector 16 of Noida, there existed a huge Hanuman temple. Hence the need to excavate the area that now houses most of the TV channels. 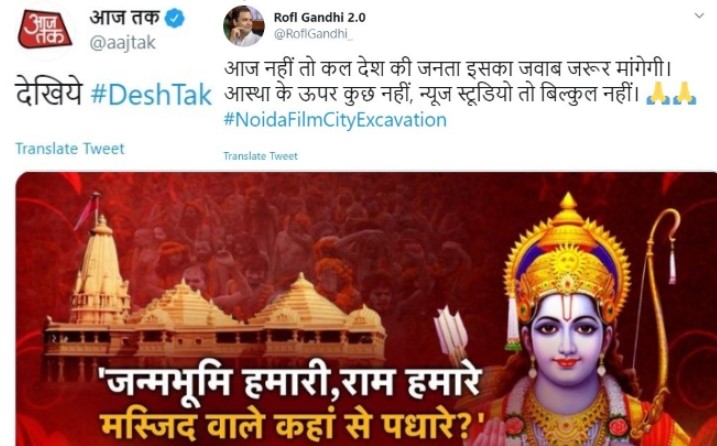 User @RoftGandhi_ posted a series of tweets in Hindi that Sector 16 houses a huge Hanuman Temple several thousand years ago when NOIDA was known as Navoday Nagar.

The anonymous Twitter user’s tweets soon led to the creation of hashtag #NoidaFilmCityExcavation to trend nationally with even prominent Twitter users using the hashtag to post their quirky tweets.

Underneath this building, there used to be a prison where Lord Krishna was born in 5619BC but it was attacked and this building (in pics) was built over it. I’m going to fast unto death unless a huge temple of Lord Krishna is built here at his birth place#NoidaFilmCityExcavation pic.twitter.com/dGzC4rTm54

If the research of Prof Dahia is true then Sach me Hanuman Temple hona chahiye waha.

Don’t ask me who is he. I got to know from another history Professor @RoflGandhi_#NoidaFilmCityExcavation pic.twitter.com/JvHgHhRG6E

One of the reasons behind the popularity of hashtag #NoidaFilmCityExcavation appears to be a religiously polarising programming headline by Aaj Tak, whose office is also located in the Film City of Noida’s Sector 16. The programming headline by Aaj Tak on Wednesday, on the day of the conclusion of the Supreme Court’s hearing in Ayodhya case, had read, “janmbhoomi hamari, Ram Hamare, Masjid waale kahan se padhare? (The birthplace is ours, Ram belongs to us. From where did these people from mosques arrive?)” 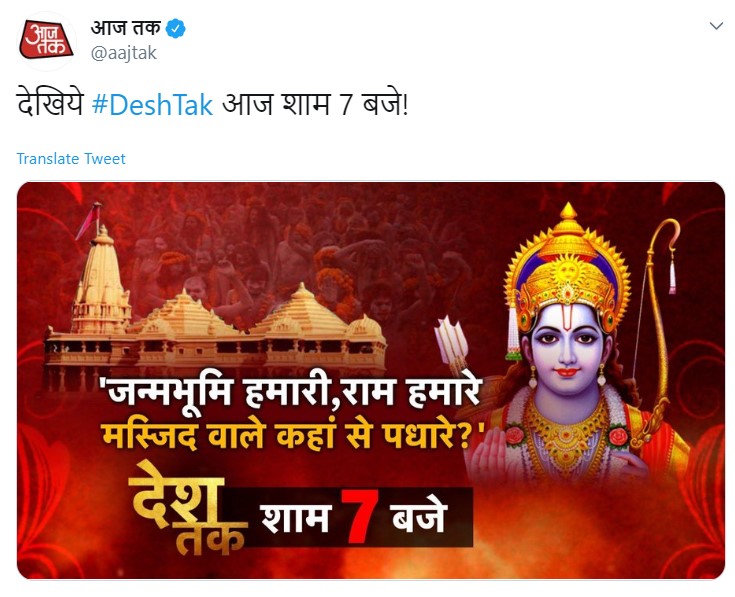 The headline tweeted by Aaj Tak evoked widespread condemnation from members of civil society as they demanded its immediate taking down. But, Aaj Tak has chosen to not delete the controversial tweet. Ironically, the controversial tweet by Aaj Tak came on the day when the TV watchdog NBSA issued an advisory to all news channels asking them to desist from provocative coverage on the Ayodhya case.