The Department of Telecommunications of the central government has taken a dim view of an ‘inflammatory video’ posted by rebel AAP MLA Kapil Mishra. In its letter, Ashish Joshi, Controller Communications, wrote to the Delhi Police Commissioner informing him about the serious nature of Mishra’s video. Mishra had called for violence against film actors Kamal Haasan, Naseeruddin Shah, lawyer Prashant Bhushan, activist Shehla Rashid and journalist Barkha Dutt among others. 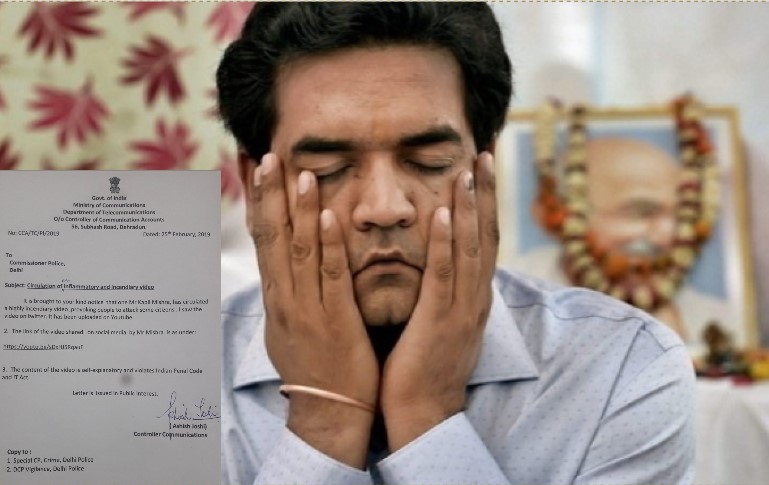 The letter to the Delhi Police by the Department of Telecommunications, read, “It is brought to your kind notice that one Mr Kapil Mishra, has circulated a highly incendiary video, provoking people to attack some citizens. I saw the video on Twitter. It has been uploaded on YouTube.”

It went on to add that the ‘content of the video is self explanatory and violates Indian Penal Code and IT Act.” Joshi concluded his note by stating that the letter was issued in public interest.

The inflammatory & incendiary video circulated by one Mr Kapil Mishra has been brought to the notice of Patnaik Sir! @CPDelhi . pic.twitter.com/7d62baw6pX

Reacting to the letter, Bhushan asked the Delhi Police to immediately arrest Mishra. He tweeted, “This lumpen MLA @KapilMishra_IND must be immediately arrested @DCPCentralDelhi. If he is not arrested in 24 hours, it would mean that Delhi Police is acting under the orders of the BJP which is aiding and abetting this call to violence.”

Mishra, in his video, had issued a chilling warning while calling for violence against veteran actors Naseeruddin Shah and Kamal Hassan, Congress Minister Navjot Singh Sidhu lawyer Prashant Bhushan, journalist Barkha Dutt and activist Shehla Rashid. In a video message, posted on Twitter, Mishra said that time had come to enter their houses and attack them since they were traitors.

Speaking to Janta Ka Reporter, Mishra had defended the content in his video and said, “People will indeed thrash those who are working against the country and supporting terrorists. I support his. People will do their job but will not take law in their hands. Why are only these people reacting to my video?”