Deepak Chaurasia of the News Nation TV channel, right-wing ‘lawyer’ Prashant Patel Umrao and Amar Prasad Reddy, media advisor to a minister in the Narendra Modi government, have been caught spreading fake news by dangerously adding a communal colour to the elephant death case in Kerala. All three individuals have been forced to delete their mischievous tweets after widespread condemnation. But, their social media posts had gone viral with thousands of retweets and likes before they decided to take down their fake tweets blaming Muslims for the death of the pregnant elephant in Palakkad in Kerala. 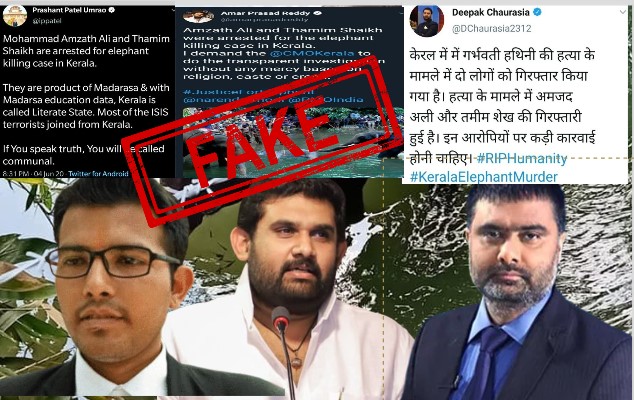 Patel, who has been called out for routinely peddling Islamophobic fake news in the past, had tweeted, “Mohammad Azmath Ali and Thamim Shaikh are arrested for elephant killing case in Kerala. They are product of Madarasa & with Madarasa education data, Kerala is called Literate State. Most of the ISIS terrorists joined from Kerala. (sic)” 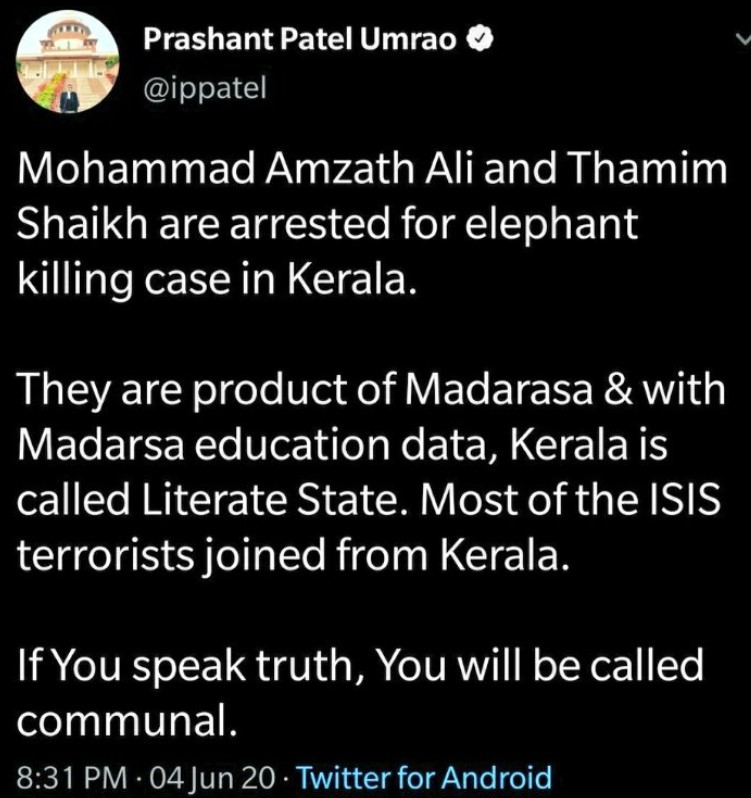 From Patel’s tweet, it was clear that he was desperately trying to vilify the Muslim community by peddling fake news. Called out for his Islamophobia and fake news, Patel was forced to delete his tweet. His Twitter bio describes him as a lawyer practicing in India’s Supreme Court. Last month, he was shamed for sharing another piece of fake news claiming that Bangladeshi nationals had attacked a Hindu saint in Vrindavan in Uttar Pradesh. However, the Mathura Police had later clarified that those responsible for attacking the Hindu saint were Hindus, adding that they had arrested the prime accused, identified as Sachidanand.

Another person with a sizeable following on Twitter peddling the same communally charged disinformation on the arrests in the elephant killing case was Deepak Chaurasia from News Nation. Chaurasia’ tweet read in Hindi, “Two people have been arrested in Kerala’s pregnant elephant’s murder case. Amjad Ali and Tamim Shaikh and have been arrested in relation to the murder. Strict action should be taken against these accused.” 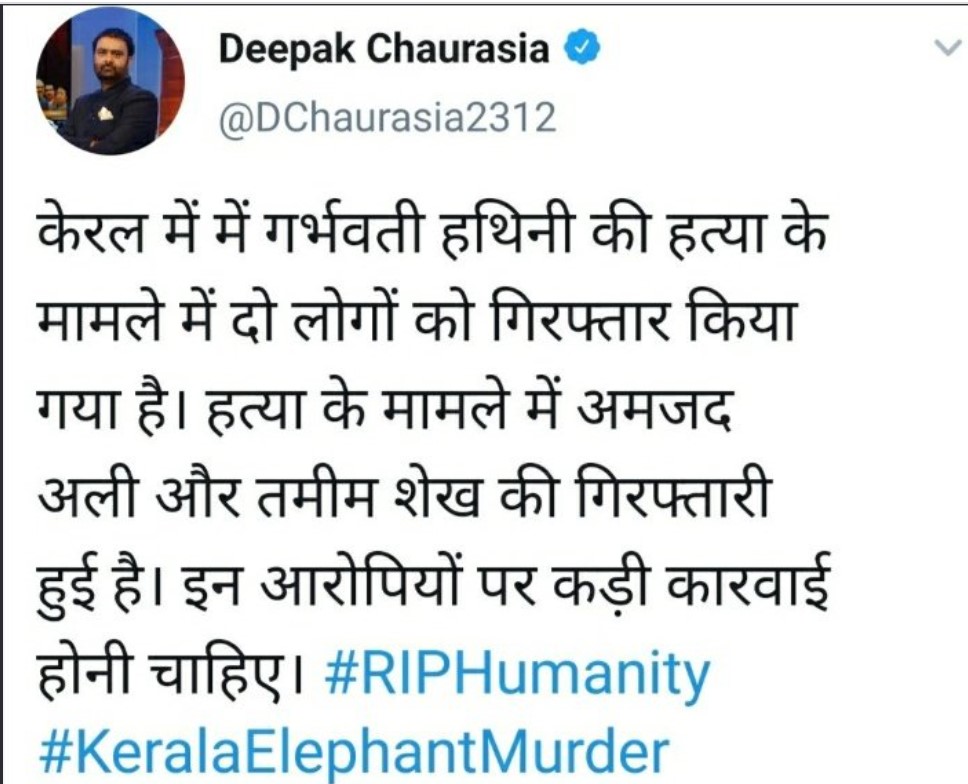 Also joining the bandwagon to defame Muslims with dangerously communal fake news was Amar Prasad Reddy, who tweeted, “Azmath Ali and Thamim Shaikh were arrested for the elephant killing case in Kerala. I demand the @CMOKerala to do the transparent investigation without any mercy based on religion caste or creed.” 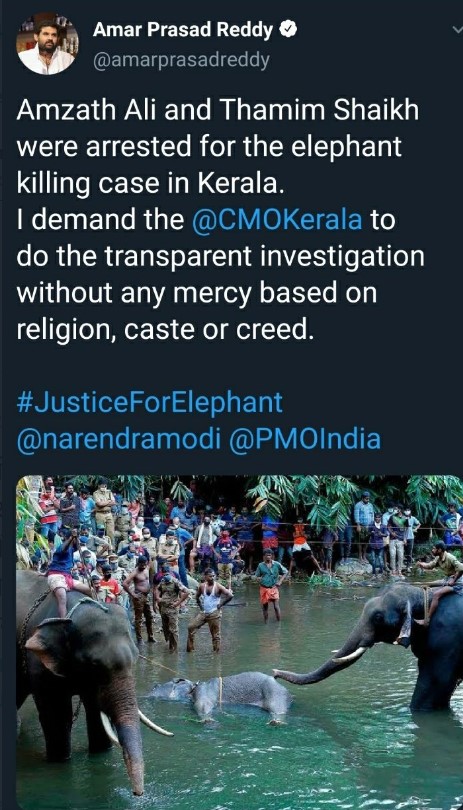 However, the government-owned Doordarshan News later tweeted informing how the Kerala Police had arrested one person in connection with the elephant murder case and the individual had been identified as one ‘Wilson.’ The tweet by DD News Malayalam tweeted, “Major breakthrough in investigation on killing of Elephant in Kerala : First arrest recorded of a person named Wilson. Two more suspects being questioned.”

Faced with public shaming, all three peddlers of fake news quietly deleted their tweets. Reddy issued a clarification without any apology, “.#JusticeForElephants Thanks to @CMOKerala for taking action against the killing of pregnant elephant in Palakkad. My earlier post on this issue is against the cruel killing of elephant, absolutely not on particular group or individual. I demand transparent investigation.”

.#JusticeForElephants
Thanks to @CMOKerala for taking action against the killing of pregnant elephant in Palakkad.

My earlier post on this issue is against the cruel killing of elephant, absolutely not on particular group or individual.

Being true to himself, Chaurasia has decided not to apologise. It appears that he had deliberately peddled the fake news falsely blaming Muslims for the elephant’s murder to defame the Muslim community. Since his tweet had already been shared thousands of times, it was enough for IT Cell members to spread the same misinformation using the screenshot of his tweet to their ubiquitous WhatsApp groups.

Umrao too has chosen not to apologise.