Top Bollywood names including Priyanka Chopra and Katrina Kaif descended at Isha Ambani’s Worli bungalow last week to take part in the Holi celebrations. Also joining them were Isha’s sister-in-law Shloka Mehta and her husband Akash Ambani. The choice of their attire gave enough indication about what was likely to take place inside the Rs 450 crore bungalow belonging to Isha Ambani. Now videos of Shloka Mehta spraying colours on Priyanka Chopra before being chased away by the Quantico actress have surfaced on social media platform Instagram. 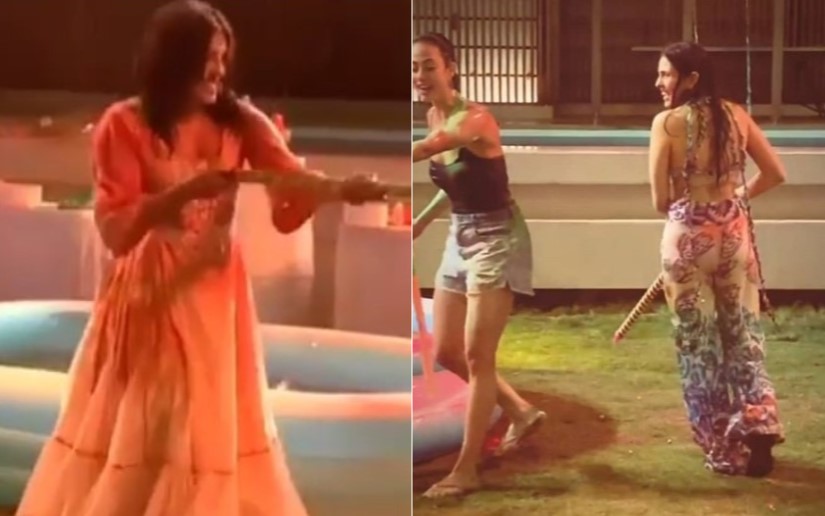 In one video, Shloka Mehta could be seen being chased away by Priyanka, who made valiant attempts to spray colour on the affable Ambani daughter-in-law. In another video, shared by one of Shloka Mehta’s fan pages, Nita Ambani’s daughter-in-law was seen partying hard with Priyanka as both had their hands on each other’s shoulder.

A post shared by Shloka Ambani Encyclopedia (@shlokaakashambani_fp) on Mar 7, 2020 at 4:20am PST

As for her husband, Akash was seen ducking as his friends attempted to smear her with colour. In one video, even Shloka could be seen spraying colour on her husband with little success.

A post shared by Shloka Ambani Encyclopedia (@shlokaakashambani_fp) on Mar 7, 2020 at 4:28am PST

Akash, who had earlier told photographers about gaining weight, too had plenty of fun as he pushed one of his friends to a make-shift inflatable swimming pool bathtub.

A post shared by Shloka Ambani Encyclopedia (@shlokaakashambani_fp) on Mar 7, 2020 at 4:50am PST

Priyanka Chopra’s husband Nick Jonas took to Instagram to share some photos from the Holi celebrations. He wrote, “My first Holi! (Five days early)So much fun celebrating with such incredible people here in my second home in India.” He also tagged Isha Ambani in his social media post.

Akash was dressed in a tie and dye T-shirt and blue jeans, while his wife Shloka wore a sleeveless crop top and palazzos. The co-ord set added to the casual, yet fun-filled theme of the Holi celebrations. Shloka had stuck to her signature open hairstyle.