Days after angry farmers chased away representatives from Arnab Goswami’s Republic TV and another lapdog media outlet, Zee News, these TV channels have decided to stop flaunting their mic with logos while sending their crew to interview protesting farmers. This is to avoid the wrath of angry farmers, who appear disgusted by the agenda-driven coverage of Indian TV channels, often ridiculed as lapdog media outlets. 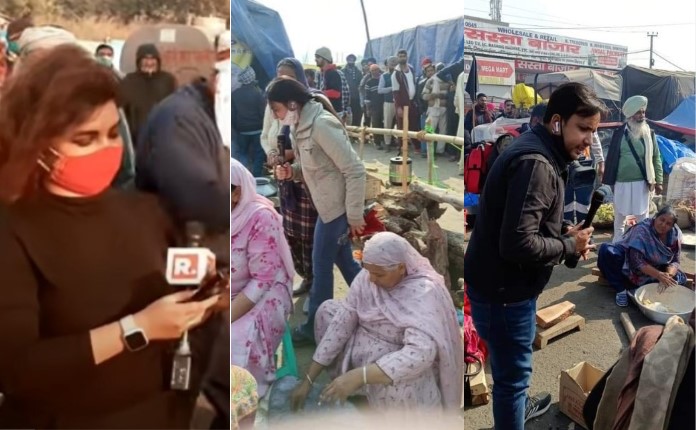 Earlier this month, at least two individuals working for Republic TV and Zee News had to scurry for safety after angry farmers targeted them questioning their propaganda. Spotting a mic-wielding female representative from Zee News, angry farmers had begun chanting ‘Godi Media Murdabad (Down with lapdog media)’ and ‘Go back Zee News.’

Another female representative from Arnab Goswami’s Republic Bharat too had to face similar wrath from angry farmers, who chased her away by chanting ‘Modi’s channel murdabad.’ (Watch the video below).

SHAMEFUL Heckling of Reporters At #FarmersProtests like they did in Shaheen Bagh. 2 WOMEN Reporters from Zee News & @Shaziya_N from @republic badly heckled by ALL MALE CROWD of “Farmers” & FORCED to leave only coz they were doing their duty #farmersrprotest #EndTheDeadlock pic.twitter.com/YU7zde2Gmh

Such is the anger against the lapdog TV channels among protesting farmers that many expressed their outrage while speaking to Janta Ka Reporter. One elderly farmer from Punjab had said, “What we call media, has caused the most destruction. These sold-out channels have harmed the country the most. They’ve been campaigning for Modi with slogans such as Ghar Ghar Modi, Har Har Modi, Sabka DSaath Sabka Vikas. They don’t want inclusive development.”

Traumatised by the nasty experience, both Zee News and Republic TV have decided to conceal the identities of their representatives by sending them to the protest site without the mic logos of their respective TV channels. This has become a butt of jokes on social media.

Some eagle-eyed Twitterati spotted that even veteran journalist Rajdeep Sardesai recently turned up at the protest site without carrying the mic ID of India Today, where he works as a consulting editor.

Went to the farmer protest without mic ID of India Today. Wonder why ? https://t.co/vo1FpZif9f

Farmers say that they have lost faith in big TV channels. One farmer made it clear that Arnab Goswami must not send his representatives to cover their protests. (Watch below)