British media watchdog Ofcom has slapped a fine of £20,000 (equivalent to approximately Rs. 20 lakh) against Arnab Goswami’s Republic Bharat for promoting hate speech. In an extraordinary ruling, the Ofcom warned Republic Bharat to not repeat the same mistake in the future. 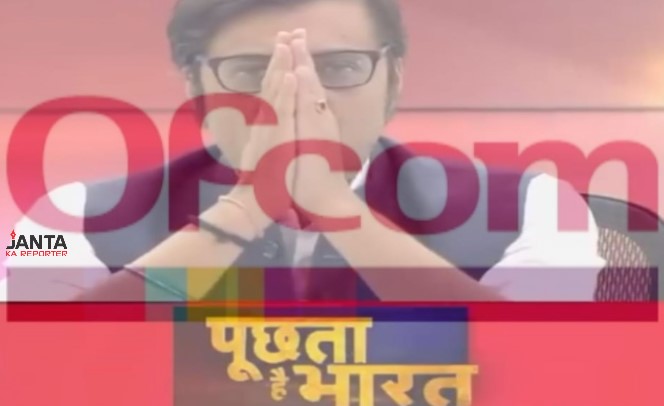 “In Ofcom’s Decision published on 24 February 2020 in Issue 397 of the Ofcom Broadcast and On Demand Bulletin 3 (the “Breach Decision”), Ofcom’s Executive found that this programme contained uncontextualised hate speech and that this content was potentially highly offensive, breaching Rules 2.3, 3.2 and 3.3 of the Code,” the Ofcom said.

The British watchdog said that ‘having considered the written representations made to us, Ofcom’s Decision is that the appropriate sanction is to: i. impose a financial penalty of £20,000; ii. direct the Licensee to broadcast a statement of Ofcom’s findings on a date and in a form to be determined by Ofcom; and iii. direct the Licensee not to repeat the programme.”

The programme in question was broadcast on Republic Bharat on 6 September last year when Goswami conducted a TV debate with three Indian and three Pakistani guests each. The debate, according to the Ofcom, was discussing India’s failed attempt to send the Chandrayaan 22 spacecraft to the moon on 22 July 2019.

A third guest, one General Sinha, had said, “Oh you useless people. Beggars. Oh beggars, oh beggars. We will douse you with 1.25kg, .75kg-, with two inches. PoK8, PoK, we are coming to the PoK. We are coming to the Gilgit, Baltistan, in Khyber Pakhtunkhwa…We are going to come, be ready. People in your country are shivering with fear that the Indian army may come. We will barge inside your home in Baluchistan, in Khyber Pakhtunkhwa, in Karachi, in your area, in Multan, in Rawalpindi and kill you. From Lahore, from Karachi to Gilgit-Balistan when we will have control.”

Republic Bharat defended the broadcast of hate speech arguing that these statements were justified by reference to the political context of heightened tension between India and Pakistan at the time of broadcast, that the programme as a whole was ‘calling for peace and unity and uplift of the entire region regardless of nationality,’ and that the discussion was balanced by the inclusion of some more conciliatory statements in the programme and the participation of guests from both India and Pakistan.”

Ofcom said that it acknowledged that the programme included one Pakistani guest who expressed the ‘view three times that the success of India’s space programme was “a victory for humanity” and “a matter of happiness”.’

The same guest, Ofcom continued, welcomed any advances by India in technology, in education, in health and in protection of minorities and indicated that Pakistan wished to learn from Indian surgeons and cooperate in sectors such as education and technology.

“The programme presenter indicated that India’s advance in space technology was “the advancement of the whole world”. We took into account that the Pakistani guests made some strong criticisms of Indian policy and its leaders. However, we considered the inclusion of limited “conciliatory” statements and brief comments which were highly critical of India by Pakistani guests failed to provide sufficient context and challenge. We considered that the overall tone of the discussion was provocative, comparing Pakistanis to donkeys and monkeys. We also noted that Pakistani contributors were repeatedly
interrupted and afforded little time to make points which may potentially have provided
challenge or context,” the Ofcom ruling said.

The media watchdog, known for its no-nonsense attitude towards ethics violations, said that whilst it agreed that it was legitimate to discuss Indo-Pakistani relations, it did not accept Republic Bharat’s characterisation of the programme as a whole. “We considered it included repeated instances of hate speech and abusive or derogatory treatment. It was, therefore, our decision that this content met Ofcom’s definition of “hate speech” and that Rule 3.2 was breached,” it said.

The maximum financial penalty, in this case, was £250,000. The British media watchdog felt that a hefty financial penalty was necessary in this case to reflect the establish the serious nature of the ‘Code breaches recorded against the Licensee, and to act as an effective incentive to comply with the Code, both for the Licensee and other licensees.’

The Ofcom also ruled that Republic TV had a history of breaches and has asked the UK representatives of Republic TV to attend a meeting to discuss its compliance arrangements.