The BJP on Friday launched a full-blown attack on Delhi Chief Minister Arvind Kejriwal and his party, the Aam Aadmi Party, for allegedly indulging in paid news as it questioned the identical news items in New York Times and Khaleej Times about Delhi schools. 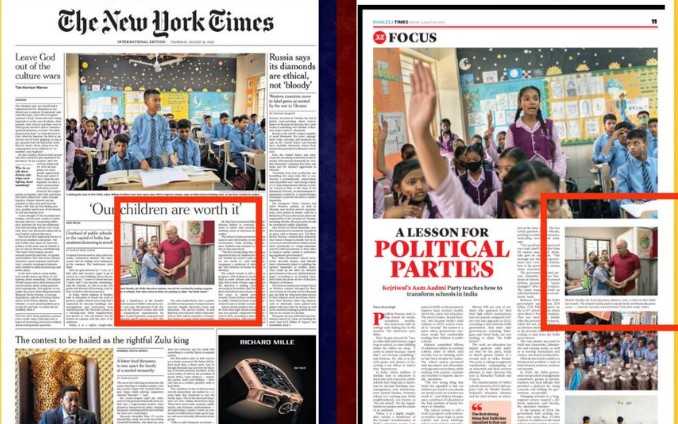 This was after Kejriwal held an emergency press conference to shout about a news article, published on the international page of the New York Times. Kejriwal claimed that even international publications were acknowledging the reforms being achieved in Delhi schools by his government.

The emergency press conference by Kejriwal to talk about the New York Times story came moments after the CBI raided 21 locations linked to people allegedly involved in the liquor scam. Also being raided was Kejriwal’s deputy and Delhi’s Deputy Chief Minister Manish Sisodia.

Also Read: CBI raids against Manish Sisodia in Delhi liquor scam case; what is the controversy?

Sisodia is being accused of corruption while awarding liquor licences under the New Excise Policy. The Kejriwal government had quickly cancelled the policy after LG VK Saxena ordered a CBI inquiry.

BJP MP Manoj Tiwari asked two different international publications namely the New York Times and Dubai’s Khaleej Times had printed identical stories about Delhi schools. “See, they are caught even her. Same word to word in New York Times and Khaleej Times… same author also.. Shameless AAP is wasting the money of the people of Delhi by giving them money in getting their photos printed.”

AAP supporters have responded to the BJP’s allegation saying that the Dubai-based newspaper had reproduced the NYT story with an attribution.

The New York Times too has reportedly denied the allegations of running the story on Delhi schools in exchange for money. “Our report about efforts to improve Delhi’s education system is based on impartial, on-the-ground reporting, and education is an issue that The New York Times has covered over many years. Journalism from The New York Times is always independent, free from political or advertiser influence. Other news outlets routinely license and republish our coverage,” the newspaper was quoted by NDTV.