Archana Puran Singh of The Kapil Sharma Show could not believe her luck recently when Bollywood actor Bhumi Pednekar informed her that she had become a fan of her Instagram videos, particularly the one featuring her domestic help Bhagyashree. But, host Kapil Sharma wasn’t so chivalrous as he accused his veteran co-star of pelting stones at the offices of Sony TV. 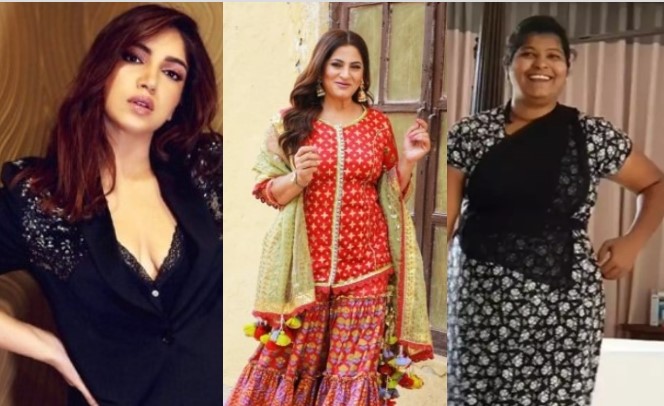 Not to miss an opportunity to take a dig at Archana, Kapil wondered if Bhumi was referring to Archana’s imaginary videos where her husband was running away. The famous comedian-actor continued to give grief to Archana by accusing her of disguising as bandit, one Mangal Singh, who routinely pelted stones at the office of Sony TV during the nationwide lockdown.

“We have a lot of blessing that we have Archana ji with us that our business started. She was the one, who got the show started. During the lockdown, someone came and began pelting stones at the office of Sony TV demanding the show to start with Archana Puran Singh as its judge. Else I will smash the remaining glasses too. I am Mangal Singh, the bandit leader,” Kapil told his guests that included Bhumi, Arshad Warsi and Mahie Gill.

The watchman, according to Kapil, said that the person pelting stones at the offices of Sony TV was a woman, who even bit his hand. As expected, everyone was left in splits by another cruel joke of Kapil at the expense of his veteran co-star.

As if Kapil’s grief wasn’t enough, Arshad too implied that Archana was scarier than a ghost. This was after Kapil asked Archana if she believed in ghosts. Even before Archana could reply, Arshad jumped in to say that Kapil should have asked this question to ghosts, implying that The Kapil Sharma Show host was worse than a ghost.

Bhumi, Arshad and Mahie were on the Sony TV show to promote their latest release Durgamati, which is a horror film revolving a government officer who is made the victim of a major conspiracy involving powerful forces.