Bharti Singh of The Kapil Sharma Show was left emotional by the presence of the screen version of Lord Ram and his wife Sita. Such was the effect of Arun Govil and Deepika Chikhalia’s presence that Bharti’s mother fulfilled her long-cherished dream of praying to on-screen Ram and Sita when they arrived at India’s Best Dancer reality show. The show with Bharti’s mother paying her obeisance to on-screen Ram and Sita will be broadcast in the next episode. Aside from soulful performances by contestants recreating the mythological magic of Ramayana,  Bharti and her husband Haarsh Limbachiyaa also could not resist their temptation to tease Govil and Deepika. 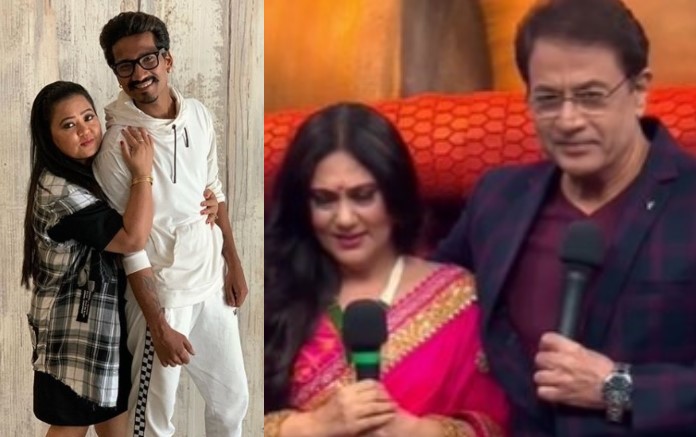 Taking a dig at Nora Fatehi, who has recently replaced Malika Arora as the show’s judge, Haarsh said that the hot actor’s presence was stopping him from turning religious even though the on-screen Ram and Sita were around.

This was after Haarsh said that Nora was looking extremely hot in her new attire, saree. Govil asked why Bharti was not saying anything to stop her husband from flirting with Nora. To which Bharti replied in her own inimitable style, “Main ghar mein jaa kar peeth pe bolti hoon. (I speak by whacking on his back at home).”

Her reply left everyone including Govil and Deepika in splits. However, Bharti used the opportunity to take a potshot at Govil as she accused him of secretly catching the glimpse of Nora, who’s become one of the hottest item song dancers in Bollywood.

Revisiting and recreation of an epic scene from the legendary serial Ramayan by then Prabhu Shri Ram Arun Govil Ji and Maa Sita Dipika Chikhlia Ji themselves. This has to be the Moment of the Day! Hands down! Who knows what other surprises are in line! Tune in to #IndiasBestDancer tomorrow night at 8 pm. @siyaramkijai @dipikachikhliatopiwala @terence_here @geeta_kapurofficial @malaikaaroraofficial @norafatehi @bharti.laughterqueen @haarshlimbachiyaa30

Govil said that he had his own unique style of admiring the beauty.

This was followed by Bharti calling on stage the ‘real-life Sita’ of Arun Govil. Bharti asked Govil’s wife, “Were you ever scared that your husband will curse you in anger (since he played the character of Lord Ram and enjoyed divine power?)”

She said that as a wife she never had such fear.

Both Govil and Deepika also recreated one of the famous scenes from Ramanand Sagar’s epic TV series, Ramayana, leaving everyone mesmerised.