Bharti Singh of The Kapil Sharma Show on Sunday revealed that she was praying for a daughter as she appeared on Indian Idol with husband Haarsh Limbachiyaa. Also joining them were Neha Kakkar and Rohanpreet Singh, a suitor of former Bigg Boss contestant Shehnaaz Gill aka Punjab’s Katrina Kaif. 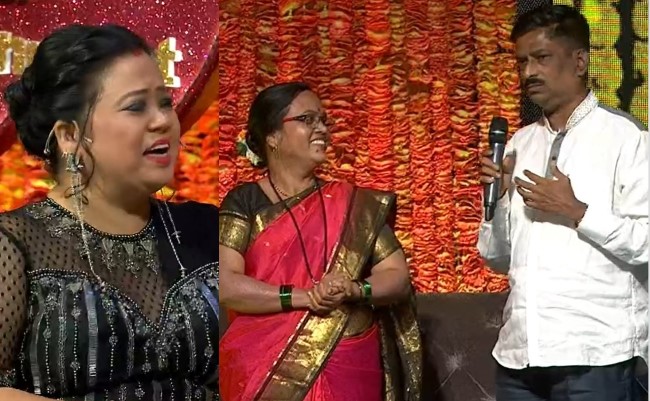 “I think of her marriage, but now I am beginning to get emotional just by the thought of (going away). What will happen to me after she’s gone. I can’t say about him (my husband), but I can’t live without her.”

Sayali’s father, an ambulance driver, too told Bharti in a choked voice, “You asked me about her marriage. But My voice is already choked. When a daughter goes to another person’s house (after marriage), she plays several roles, of a daughter and a wife. But she’s always looked given me a lot of love. May God give such daughters to everyone.”

This prompted Bharti to say even she wished to have a daughter like her. She said, “What a statement. To me also sir.”

Everyone on the sets of Indian Idol was left in splits after Bharti corrected Sayali’s Dad for addressing her as sir. She said, “I came here looking quite beautiful today but you (are still addressing me as a man).”

The singing reality show saw laughter riots they celebrated the weddings of Neha Kakkar with Rohanpreet Singh and Bharti Singh with Haarsh Limbachiyaa. Both Rohanpreet and Haarsh were made to become human tables as their wives walked while making paanipuri.  Haarsh won the challenge. However, Rohanpreet earned everyone’s plaudits when he was asked to showcase his bhangra dance skills.

The show also witnessed some emotional scenes when Rohanpreet thanked Neha for changing his life forever by agreeing to marry him, leaving the Indian Idol judge in tears.

Neha and Rohanpreet got married in October last year before travelling to Dubai on a honeymoon. Rohanpreet had shot to fame by taking part in a singing reality show. He had later taken part in another reality show as a suitor of ex-Bigg Boss contestant Shehnaaz Gill aka Punjab’s Katrina Kaif.