The Indian cricket board on Friday faced incessant trolling after it posted a tweet with a photo of former India cricketers Ravi Shastri and Rahul Dravid, calling them ‘two greats.’ The BCCI’s decision to place Shastri in the same league as Dravid left Twitterati irked. 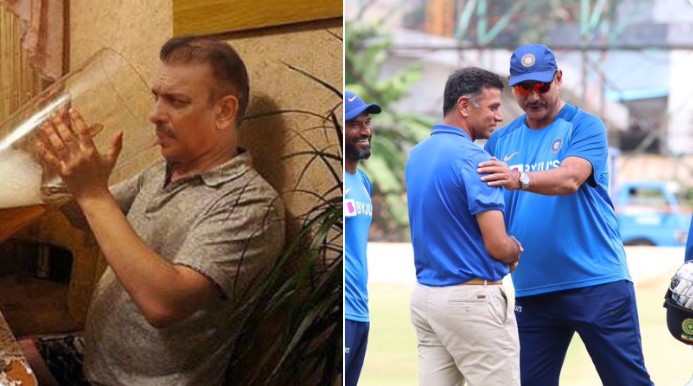 While sharing the photo, the BCCI tweeted from its official handle, “When two greats of Indian Cricket meet.” In the photo, Dravid can be seen interacting with the members of the Indian cricket team during their practice session. Shastri, who is the head coach of the Indian team, can be seen sharing some light moments with the former India captain.

However, cricket fans on the microblogging site began to incessantly troll the BCCI for calling Shastri a cricketing great. One user wrote, “One is the wall other is a Tanker.” Another commented, “A great player and a captain with a great alcoholic.” “Two greats – Rahul & Dravid,” wrote another user.

Trying not to be rude, but please Don’t fuckin ever put Rahul Dravid in the same league as Ravi Shastri . https://t.co/EVA1dU7eZt

Rahul Dravid: Batsmen should defend the ball with soft hands so that ball doesn’t go to the slips

Ravi Shastri: You look really fit and I don’t, why so?

Rahul Dravid: Because I duck and you drink! pic.twitter.com/8yomaamHY5