The controversial tweet by Patra targeting Rajiv Gandhi, father of Rahul Gandhi and Priyanka Gandhi Vadra, had read, “Congress supporters have filed a complaint after I called Nehru and Rajiv corrupt. They need to face more humiliation by the teacher. Nehru also gave birth to the Kashmir problem. Had Nehru not been there, we wouldn’t have the Kashmir issue. Rajiv Gandhi stole Bofors and got 3,000 Sikhs killed. Go and complain now.” 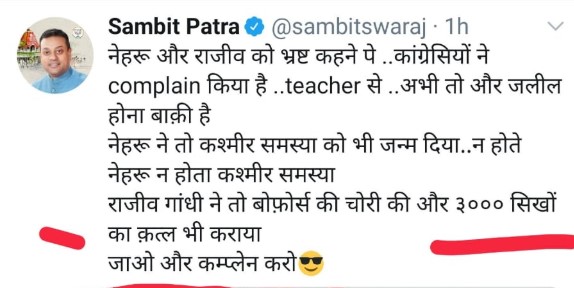 No sooner did Patra post his defamatory tweet, an FIR was filed by the Raipur Police in Chhattisgarh. “We have registered a case against Patra under various sections of IPC on the complaint of Padhi and investigation in the case is going on,” Arif Sheikh, Raipur’s superintendent of police was quoted by the Hindustan Times.

An FIR has been registered against @sambitswaraj by @Cocopadhi and @subodhharitwal of the @iyc for rumor mongering against former PMs Pt. Nehru and Sh. Rajiv Gandhi against well established facts and history.
The liers need to be shown their place.

Patra was booked for promoting enmity between different groups on grounds of religion, race, place of birth, residence, language, etc and conducing to public mischief.

The case has been registered under sections 153A (promoting enmity between different groups on grounds of religion, race, place of birth, residence, language, etc), 505(2) (statements conducing to public mischief) and 298 (uttering, words of Indian Penal Code ( IPC).

Coercive action against Patra has followed similar police complaints against his friend Arnab Goswami, who’s been busy approaching the Supreme Court, seeking protection from arrest. The top court will pronounce its verdict within the next two days. The Mumbai Police had grilled Goswami for more than 12 hours.