Congress leader Rahul Gandhi on Wednesday threw his weight behind Kunal Kamra as he lashed out at the Centre’s Narendra Modi government for imposing a flying ban on the stand-up comedian. His response has come a day after several airlines imposed a flying ban on Kunal for his decision to ambush Republic TV’s Arnab Goswami mid-air. DGCA chief Arun Kumar was quoted by Huffpost India as saying that the decisions by airlines at the behest of Union Minister Hardeep Singh Puri were in violation of ‘Civil Aviation Requirement (CAR Section 3, Series M, Part Vl on “Handling of Unruly Passengers) rules revised in 2017.” 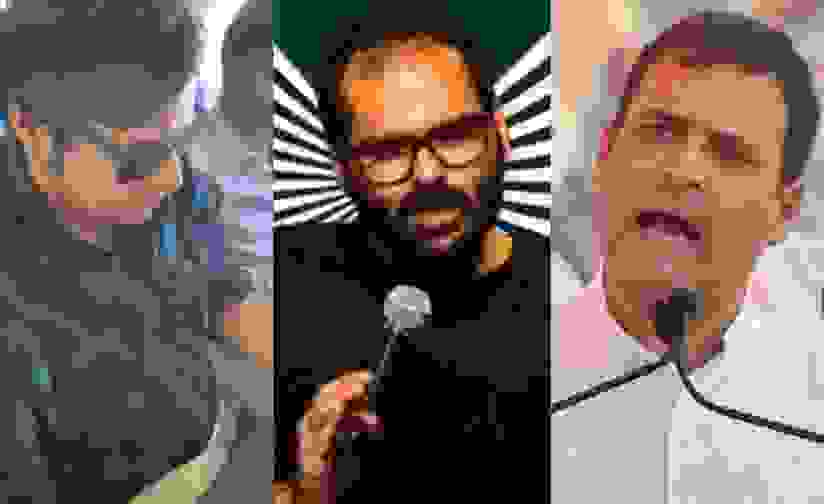 Taking to Twitter, Gandhi wrote, “The ban imposed on #kunalkamra by 4 airlines is the act of a coward leveraging his influence with the Govt to silence a critic. Those who use their “news” cameras as 24x7 tools of propaganda, should show some spine when the camera is turned on them.”

The ban imposed on #kunalkamra by 4 airlines is the act of a coward leveraging his influence with the Govt to silence a critic.

Those who use their “news” cameras as 24x7 tools of propaganda, should show some spine when the camera is turned on them. https://t.co/NNwVcq4ZOj

Puri, who heads India’s civil aviation ministry, had directed airlines to take coercive measures against Kunal after the video of him cornering Goswami in the flight went viral. No sooner did Puri tweet directing airline companies act against Kunal, IndiGo, GoAir, SpiceJet and Air India announced that they were banning the comedian from flying.

However, Huffpost website quoted the head of India’s aviation watchdog as saying, “The airline should have waited for the internal enquiry to be completed before putting the passenger on the no-flyers list for six months.”

Kunal was quoted as saying, “At no point was I disruptive and at no point did I not follow orders of the cabin crew or the captain. At no point did I endanger the safety of any passenger on board. The only damage I caused was to the inflated ego to the journalist.”

Kunal had earlier told Janta Ka Reporter that he had done for Dalit research scholar Rohit Vemula, who committed suicide in the Hyderabad University in January 2016.

(Update: The DGCA has now issued a clarification saying that its chief was misquoted by Huffpost India. Its statement read, “Huffpost has misquoted/misrepresented the facts as stated by the Director General of Civil Aviation in its news item published today at 5.01 PM. This is to reiterate that the action taken by the airlines is in complete consonance with Civil Aviation Requirements (CAR) Section-3, Series M Part VI on Handling of unruly passengers.

BCCI cancels planned venues for West Indies tour, all ODIs to be held only at Narendra Modi Stadium