Amitabh Bachchan on Friday night warned the husband of a KBC contestant from Kolkata to not mess with Bengali women to avoid their wrath since they could take the form of Goddes Druga and Kali. Bachchan, whose wife Jaya Bachchan herself is a Bengali, issued the advisory while in conversation with a contestant from Bengal. The legendary actor also sensationally revealed that he had been a massive fan of Waheeda Rahman and he could not believe his luck when he got the opportunity to act opposite her in Hindi films. 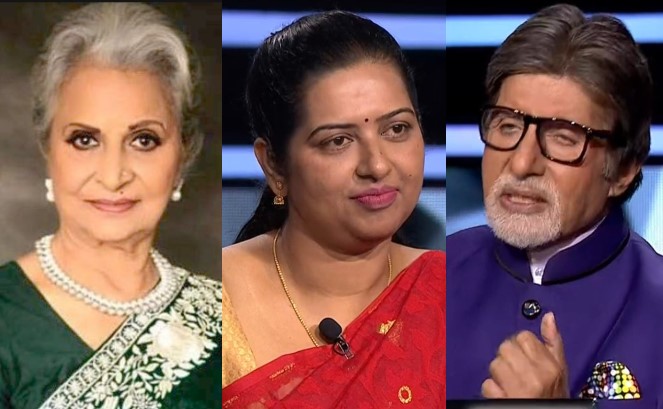 Addressing the contestant’s husband, Bachchan said, “Just ask her how much will she give you from her winning prize money.” The veteran actor then asked the contestant from Kolkata, “What will you do with Rs 6.40 lakh?”

The contestant said that she will donate a part of her winning prize since her husband had once denied her money when she expressed her desire to donate. “There was an incident when I asked my husband for some money. He told me, ‘first earn your own money then think of donation.’ So I have to give him a befitting reply now.”

Addressing the husband, Bachchan said, “Brother, now that she has earned the money, it’s her earning. You can’t do much about it. Stay quiet else, I am feeling awkward to pronounce it, Bengali wives immediately take the form of Goddes Durga. Kali Maa. Do you understand?”

Bachchan was making a reference to his personal experience since he too is married to a Jaya Bachchan, herself a Bengali.

Then came Bachchan’s confession about Waheeda Rahman, who was a part of the KBC question on the show. The KBC host played an audio of Waheeda Rahman before asking his question, which read, “The actress heard in this audio clip was not a part which of these films?” The options were Mr. & Mrs. 55, Chaudhvin Ka Chand, Guide and Sahab Biwi Aur Ghulam.

The audio was of legendary Bollywood actor Waheeda Rahman and the contestant correctly answered that she had not acted in Mr. & Mrs. 55. This prompted Bachchan to reveal how he had always been a huge fan of Waheeda Rahman as he said, “Waheeda Rahman is known for her hits in the 50, 60s and 70s during her career. She was awarded the National Film Award, two Filmfare awards out of 8 nominations and the Filmfare lifetime achievement award and the centenary award.”

Revealing his admiration for Waheeda Rahman, Bachchan said, “She’s been my favourite since I started watching films. I acted in several films with her. I could never believe that I would get an opportunity to act opposite her. I am such a huge fan of hers.”

The contestant went on to win Rs. 25 lakh in prize money.