Thursday saw Twitter explode after actor Diljit Dosanjh shut up Kangana Ranaut for her tweet, now deleted, defaming two elderly women–Shaheen Bagh’s Bilkis Dadi and Punjab’s Mahinder Kaur. What made Diljit trend on the microblogging site was his hard-hitting replies to Kangana in Punjabi. Many applauded the Udta Punjab actor for her courage to take on an actor, who’s often faced flak for using her social media account to post communally divisive posts. Many drew a parallel between his attack against Kangana and silence of Alia Bhatt, Karan Johar or Hrithik Roshan. Amidst, widespread applause for Diljit, food delivery app Zomato too took a veiled dig at Kangana by sharing a tweet in Punjabi. 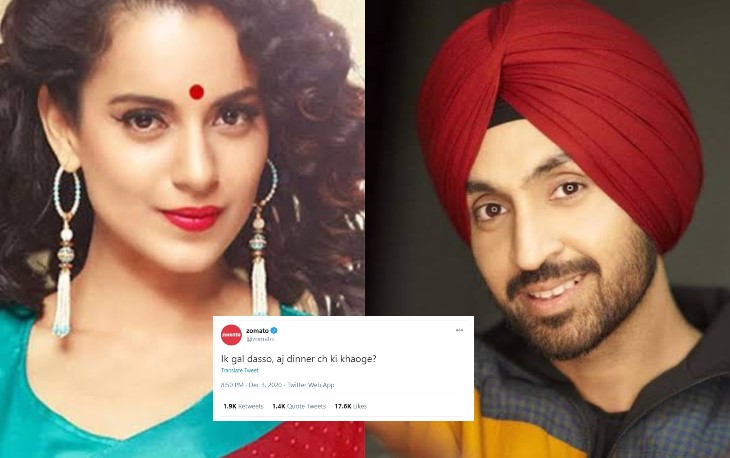 The tweet by Zomato read, “Ik gal dasso, aj dinner ch ki khaoge? (Tell me one thing, what will you eat in dinner tonight?)”

Zomato’s tweet appeared to rub the Hindutva supporters up the wrong way as they threatened to uninstall the app. Incidentally, this came just days after another food delivery app Swiggy took a potshot at the supporters of Prime Minister Narendra Modi by saying that it was unable to refund education to those who opposed farmers’ protests.

Faced with widespread condemnation, Kangana on Thursday made desperate attempts to change the topic by invoking nationalism. But Diljit appeared determined to not provide the controversial actor an easy escape route. His replies prompted Twitterati to desperately look for their translations in Hindi or English. Many lamented at their lack of knowledge of Punjabi on a day the language appeared to leave Kangana incredibly rattled. An overwhelming majority of Twitter users concluded that even Bollywood stars such as Karan Johar, Alia Bhatt and Hrithik Roshan had failed to achieve what Diljit pulled off on Thursday.

Kangana had caused grief to Alia, Hrithik and Karan among others with her incessant attack in the past. These artists maintained their dignity and declined to engage with her in the language that she used to launch unprovoked attacks against them.