Colors TV’s reality show Bigg Boss turned incredibly ugly on Tuesday night with Asim Riaz being accused of attacking popular TV actress Rashami Desai’s modesty during a fight. This was after Asim raised his objections over Rashami’s unilateral decision to ration chapatis for the breakfast. Later, he also faced allegations of inappropriate behaviour towards Mahira Sharma and Devoleena Bhattacharjee. 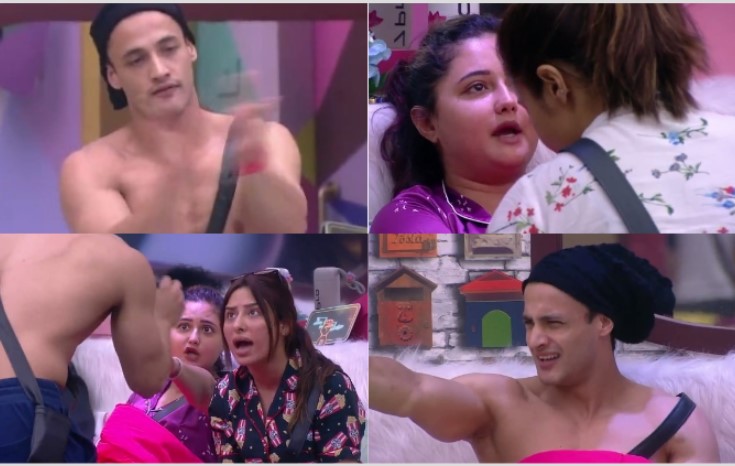 Unhappy over being served just one roti, Asim challenged Rashami questioning her decision to fix the number of rotis being served to each housemate to just one. “So much negativity during the breakfast,” Asim complained while lying down in his bed. He added, “First you give us just one roti and that too with so much of negative energy. I will not eat even that from tomorrow.”

Soon their war of words turned ugly as Rashami, who was lying in her bed, bluntly told Asim, “I am not the servant of your abbu (father).” This prompted other contestants belonging to respective groups to join the shouting match.

While Mahira Sharma, Siddharth Dey and Paras Chhabra stood in support of Rashami, Siddharth Shukla countered them on behalf of Asim. At one point Asim, who was seen moving around the house topless, charged at Rashami on her bed. He said to Rashami, “If you are not doing your work properly, I will teach you.”

Rashami took objection to Asim’s aggression towards Mahira as she declared that his bnehaviour towards a female contestant was simply unacceptable. Asim disagreed with her.  This was after Asim had charged aggressively towards Mahira when she tried to defend Rashami.

Rashami was seen breaking down on a few occasions during the show fearing her eviction this weekend. She made desperate pleas to Abu Malik and Devoleena Bhattacharjee to save her since she had been nominated for the third week in a row.

The bad blood between the two groups led by Siddharth Shukla and Paras Chhabra continued even during the weekly task BB Toy Factory. Devoleena was incensed by the inappropriate touch from Asim during the task as he snatched task materials from her to give them to his team comprising Aarti Singh, Shehnaaz Gill and Shefali Bagga. Asim, for his part, alleged that Devoleena had scratched him first in a bid to grab materials to build toys in the house.

The team with the most number of approved toys will win the weekly task. The winning team will get a chance to select this week’s Queen of the house, who will enter the finale week as the first contestant.