Disha Patani’s dance moves during her birthday party left boyfriend Tiger Shroff utterly mesmerised prompting the Malang star to confess her love for her Baaghi co-star. Bollywood actress Disha Patani on Saturday celebrated her 28th birthday, reportedly with close friends and the Bharat star used the opportunity to publicly express her love for rumoured boyfriend Tiger Shroff. This was after Tiger shared a video of Disha flaunt her dance moves to party music being played in the background. Disha did so by sitting at one position, prompting Tiger to take a dig at her mental state. 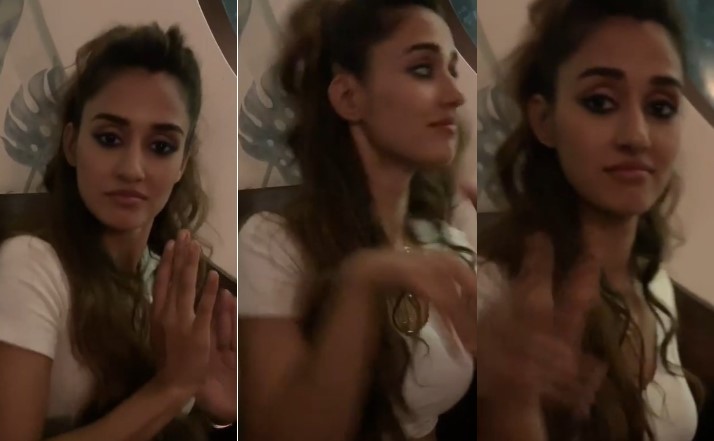 Tiger shared the video with a cheeky caption that read, “3 waffles and 3 pancakes later ?…happy birthday rockstar.” Not to be left behind, Disha too used the opportunity to publicly express her love for Tiger as she wrote, “Youuuuu ??????❤️❤️❤️❤️❤️? thank you superstar.” Disha used plenty of red-heart emojis to convey her sentiments for her boyfriend.

Disha and Tiger are one of the hottest Bollywood couples. Both stars were often spotted dining out together in Mumbai until the city was hit by the global COVID-19 pandemic in March this year. Since then, both of them have been forced to remain in quarantine due to the nationwide lockdown.

The government has, however, relaxed the lockdown norms recently, but it has still not allowed the entertainment industry to resume its activities.

In March, Disha Patani had publicly mourned the bereavement in boyfriend Tiger Shroff’s family after the Baaghi 3 actor’s ‘brother’ of 17 years died. This was after Tiger informed his 20 million-plus fans on Instagram about the death of his cat, who he said was his brother of 17 years.

On the work front, Disha was shooting for Radhe: Your Most Wanted Bhai, her next big film opposite Salman Khan after Bharat. However, the makers of the film have not announced a new date for the resumption in shooting of Radhe.