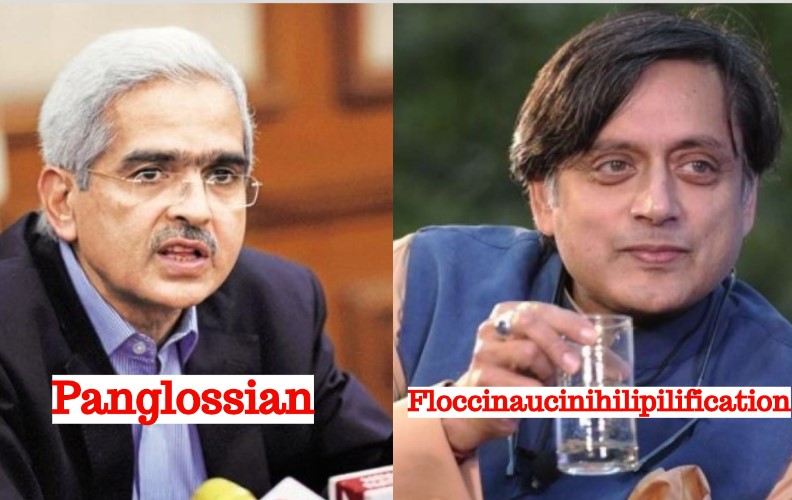 The use of Floccinaucinihilipilification had left Twitterati puzzled as they scrambled through the pages of dictionary to make sense of the 29-letter word. Nearly a year later, the word has found a place in the minutes of the Reserve Bank of India’s monetary policy committee meeting.

According to NDTV, the minutes published on Wednesday quoted MPC member Chetan Ghate as saying, “estimates of economic growth in India have unfortunately been subject to a fair degree of floccinaucinihilipilification. Notwithstanding this, growth is likely to pick up.”

According to the Oxford dictionary, Floccinaucinihilipilification is a noun, which is used to refer to the action or habit of estimating something as worthless.

If this was not enough, RBI Governor Shaktikanta Das later left everyone scratching their heads by using Panglossian in a speech on the state of the Indian economy as he said, “I am not saying we maintain a Panglossian countenance and smile away every difficulty.”

Panglossian is derived from the one Dr. Pangloss and is used to describe a ‘ludicrously optimistic’ approach. Dr. Pangloss is the famous character in Voltaire’s satire Candide,  written by French philosopher Voltaire in 1759.

Earlier this week, Tharoor had used another tongue-twister while extending his supporter for his party colleague P Chidambaram, who was arrested by the CBI last night. Taking to Twitter, Tharoor had written, “Well said @PChidambaram_IN! It is a tribute to your strength of character that you are standing up to persecution &character assassination w/ courage & confidence. I believe justice will prevail in the end. Till then we will have to allow some malicious minds their schadenfreude.”

Schadenfreude is used to explain the pleasure derived by someone from another person’s misfortune., synonymous to sadism.