Police in London say that a student from Singapore was brutally attacked in central London last Monday as his assailants said that they did not his ‘coronavirus’ in their country. The student has been identified as Jonathan Mok, who took to Facebook to share his ordeal. with photos of a swollen face. 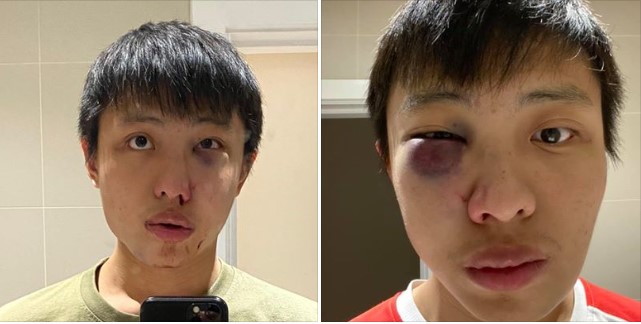 Mok wrote, “Last Monday, at roughly 9.15pm on Oxford Street in London, I walked past a group of young men, when I saw one of them look at me (just as he walked past me) and said something to me, which I could make out the word ‘coronavirus’. I was stunned and turned around to have a look at the man (who) made the statement. He was still staring at me as he walked past and realised I was looking at him. He shouted ‘Don’t you dare look at me, you ____’ (I could not catch the last word because of the accent).

“Within 3 seconds, he was in my face, together with 3/4 other young men, and a young lady (all of whom seemed no older than 20 years old, but were all more than a head taller than me).”

He continued, “All of a sudden, the first punch was swung at my face and took me by surprise. When I was still shocked by the first hit, the guy delivered the second sucker punch. By then, a few passers-by had stopped and one of them tried to reason with them that 4 on 1 was not fair. The attacker’s friend tried to swing a kick at me as I was explaining to the passer-by that I hadn’t done anything at all.”

One of his attackers, he wrote, shouted, “I don’t want your coronavirus in my country’, before swinging another sucker punch at me.”

The Met Police has said that they were treating the attack as ‘racially aggravated’ adding that no arrests had been made so far.

Coronavirus, which originated from China has caused a lot of panic in the UK with the government expressing fear that the country may lose a fifth of its workforce due to sick leave at the peak of the coronavirus epidemic.