The UAE company Security-Transguard on Wednesday said that it had sacked one of its employees for celebrating the New Zealand terror attack that killed 50 Muslim worshippers. The UAE government had later deported the man to an unnamed country. Both the company and the UAE government did not disclose the identity of the individual. 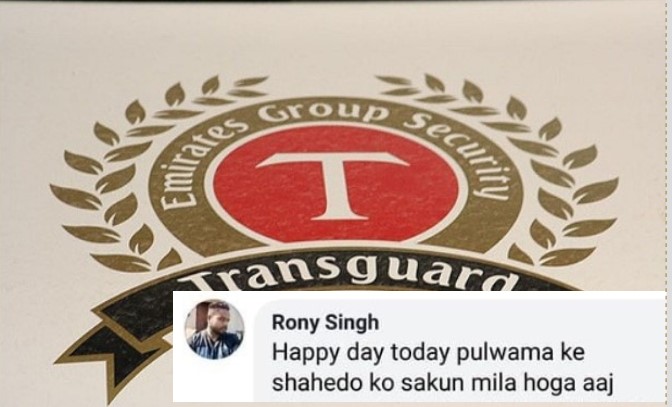 However, it appears that the man in question is an Indian national, one Rony Singh, whose Facebook post on Friday last week had evoked angry reactions on social media platforms. While commenting on the Christchurch terror attack, Singh had written, “Happy day today. The martyrs of Pulwama must have felt peace today. Thank God. This should happen during every Friday prayer even in India. Hypocrite community (Muslims).”

Other social media users too highlighted how he was an employee of Security-Transguard in Dubai, while demanding action against him.

This hate-monger who works in dubai is rejoicing the terror attack in #Christchurch and calls for more killings during Friday Prayers HE is RONY SINGH and this is his FB Profile @DubaiPoliceHQ request to take appropriate action @AlQasimiEmarati https://t.co/8OkGvnx0Cd… pic.twitter.com/u01XcuqgY4

Rony Singh, working for @TransguardHQ in Dubai, at the Dubai Airport, wants mass murder at mosques every Friday. I hope @DubaiPoliceHQ will act before he carries out his threat. Cc @GregWrd pic.twitter.com/Po7NedbeVo

The company was quick to launch an inquiry and found Singh guilty. In a statement, Transguard said, “Over the weekend, a Transguard employee made inflammatory comments on his personal Facebook account celebrating the deplorable mosque attack in Christchurch, New Zealand. This prompted an internal investigation, which uncovered the fact that the individual in question had been posting his views on social media under an assumed name.”

It added, “After verifying this person’s actual identity, he was apprehended by Transguard, stripped of his security credentials, terminated from our employment and handed over to the relevant authorities as per company policy and UAE Cybercrime Law No. 5 of 2012. As of this statement, he has been deported by the UAE government.”

An Australian national, Brendon Terrant, had killed 50 Muslim worshippers during their Friday prayers last week. He was later arrested. New Zealand Prime Minister Jacinda Ardern said on Tuesday that Terrant will face the full force of law for his crime against humanity.