Janta Ka Reporter 2.0
Home Coronavirus Pandemic “Who are you trying to kill, Corona or humans?”: Angry reactions after...

Social media has erupted in anger after a video of poor migrant workers being given a chemical bath to disinfect them amidst coronavirus pandemic went viral on social media. The reported incident took place in Bareilly in Uttar Pradesh, which is governed by the BJP. 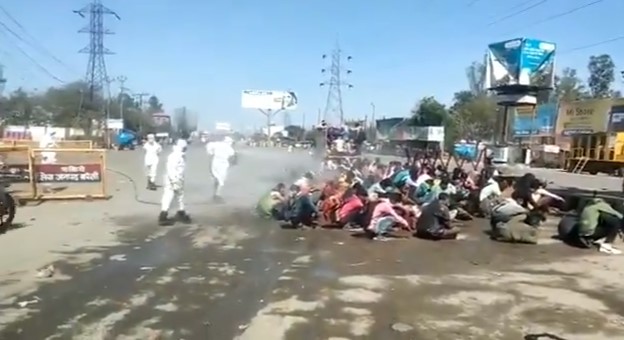 In the viral video (see below), government officials could be seen sanitizing the road with the chemical spray while also using the same disinfectant to ‘clean’ a group of poor migrant workers, who had recently arrived back from the bigger cities in the wake of the 21-day lockdown. In the viral video, a group of workers could be seen huddled in a corner as officials sprayed chemical on them.

Is the administration out of its mind? Migrant labourers and their families were sprayed with chemical solutions upon their entry in Bareilly!

Chemical solution sprayed on migrant workers and their families in #Bareilly. This is how they treat humans in Yogi’s UP.
Hate viruses are more brutal than #Covid19.@KanwardeepsTOI pic.twitter.com/oUpGSRqbns

Who r u trying to kill, Corona or humans? Migrant labourers and their families were forced to take bath in chemical solution upon their entry in Bareilly. @Uppolice@bareillytraffic @Benarasiyaa @shaileshNBT pic.twitter.com/JVGSvGqONm

Faced with condemnation, the Bareilly administration said that it had ordered action against those involved in spraying of the chemical on migrant workers. District Magistrate Nitish Kumar said, “This video has been investigated. The affected people are being treated under the supervision of the CMO. Bareilly Municipal Corporation and Fire Brigade were instructed to sanitise the buses, but in their extreme alertness, they did this (sprayed chemical on workers). Action has been ordered against concerned officials.”

The Hindustan Times quoted a local official from the fire department as saying, “The water has been mixed with sodium hypochlorite (liquid bleach).”

Even Union Health Secretary Luv Agarwal was asked by this incident during his daily press briefing on Monday. He too said that incident had taken place because of ‘over-zealous’ officials.