Virat Kohli’s 42nd century guided India to an easy win against West Indies in their first One Day International match against the hosts on Monday. India defeated West Indies by 59 runs under Duckworth Lewis method, taking a 1-0 lead in the ongoing ODI series. The game was interrupted by rains, bringing the number of overs for West Indies to 46 instead of 50. 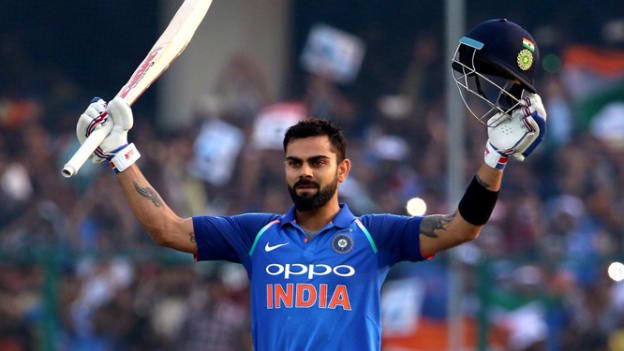 Evin Lewis was the top scorer for West Indies with 65 runs off 80 deliveries but rest of his teammates failed to contribute with their bat. Nicholas Pooran appeared set for a big total but he too departed for 42 after he gifted a catch to Kohli off Bhuvaneshwar Kumar’s bowling. Kumar was the chief tormentor for India as he picked up four wickets.

Kuldeep Yadav and Mohammed Shami scalped two wickets each, while Khaleel Ahmed and Ravindra Jadeja took one wicket each.

Earlier batting first, India amassed a total of 279 for the loss of seven wickets in their quota of 50 overs. Skipper Virat Kohli completed his 42 One Day International century as he played an impressive knock of 120 runs in 125 balls. Also giving him a good company from the other end was Shreyas Iyer, who scored 71 runs 68 deliveries.

Virat kohli another master class in one day cricket @imVkohli @BCCI .. what a player

Noted cricket commentator Harsha Bhogle tweeted, “Masterclass in innings building from Virat Kohli. Live lesson for Rishabh Pant and Shreyas Iyer on how to do it. Hundred no 42.”

Masterclass in innings building from Virat Kohli. Live lesson for Rishabh Pant and Shreyas Iyer on how to do it. Hundred no 42

The Indian captain is now 8th on the list of all-time ODI run-scorers.

As for West Indies, other than Carlos Brathwaite, no other bowler proved effective.  Brathwaite ended his 10-over spell with 3-53, while Roston Chase, Jason Holder and Sheldon Cottrell scalped one wicket each.