Jofra Archer was at his bowling best as he scalped six Australian wickets in the third Test at the Headingley cricket ground on the first day of the match. Archer’s career-best spell of 6-45 ensured that Australia were all out for 179 at the end of the first day’s play. 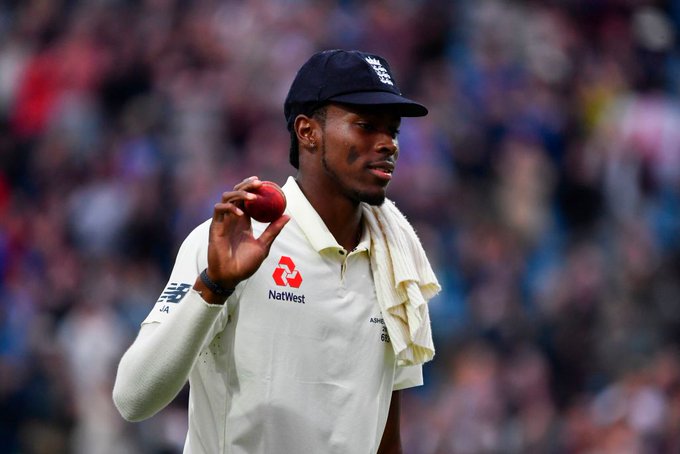 Archer, now has a Test bowling average of 12.36, now has a chance to complete his first-ever hat-trick if he manages to take a wicket off his first ball in Australia’s second innings. He can join Australia’s Merv Hughes, who is the only bowler to take a Test hat-trick spread over three overs against West Indies at Perth in1988

Other than Marnus Labuschagne, who has replaced Steve Smith, and David Warner, no other Australian batsmen were able to shine with the bat. Labuschagne scored 74 runs while Warned was out for 61. Such was Australia’s batting collapse that they lost their last eight wickets for just 43 runs.

Stuart Broad took two wickets, while Chris Woakes and Ben Stokes picked up one wicket each.

Archer told BBC’s Test Match Special programme, “I didn’t do too much differently from Lord’s. It was a bit bowler-friendly today. I’ll more than take 6-45 but I can be tidier in the future.” Former England captain Michael Vaughan said that if England were able to make 300 in their first innings, the hosts ‘should win the game.’ “But don’t think it’s all done. Someone has to get in and get a big score. If England are bowling again tomorrow, game on. If they bat all day, they win the Test,” Vaughan said.

Warner, who finally regained his form on Thursday, said that his side’s performance with the bat was disappointing. “But they won the toss, bowled and had the conditions in their favour. They were patient and our top order got out to good balls. We’ll look to dismiss them for under 200 if possible,” Warner added.

Australia are currently leading the series 1-0 after defeating England in the first Test at the Edgbaston cricket ground.