India’s medium-pace bowler Deepak Chahar wreaked havoc against Bangladesh in the final T20 International on Sunday night as he ended the game with a spell of 6-7. Deepak smashed the previous best bowling spell in a T20 International match held by Sri Lanka’s Ajantha Mendis. Soon after the match, Deepak’s teammate Yuzvendra Chahal called him ‘shameless’ while interviewing him for ‘Chahal TV.’ 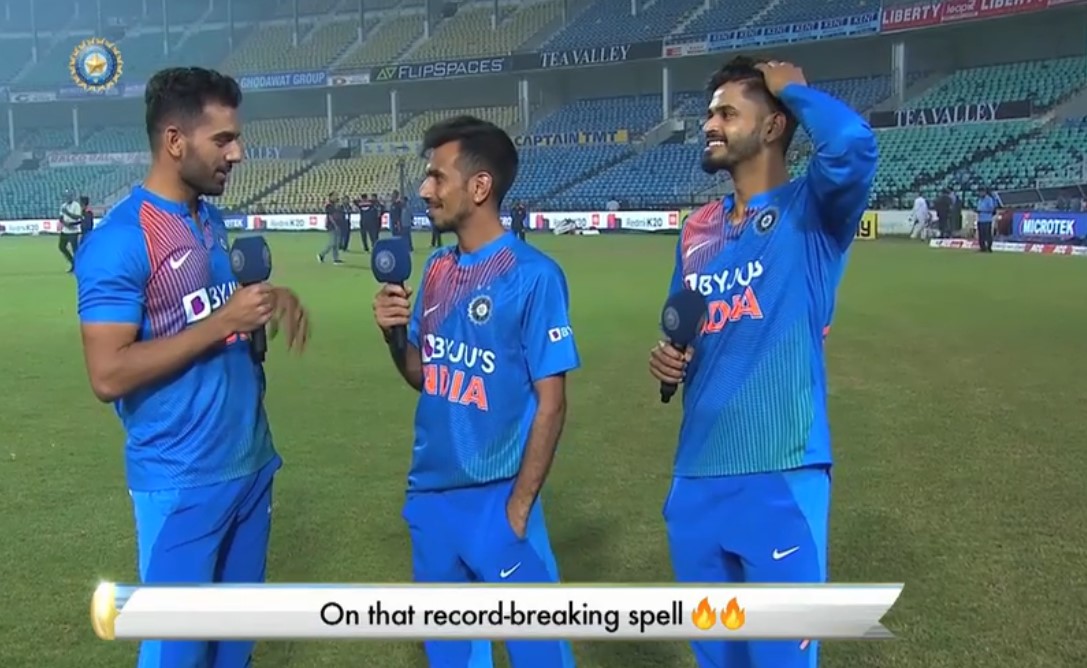 In a video posted by the BCCI on Twitter, Yuzvendra is seen interviewing Deepak and another hero of the Sunday’s match, Shreyas Iyer, who went on to smash a quickfire 62 that included five huge sixes and three boundaries off Afif Hossain’s bowling.

Yuzvendra started his interview by addressing Deepak, “Chahal TV is back from Nagpur. Brilliant series win. What should I say about bowling. He (Deepak) broke my record today. You are such a shameless man!”

At this point, Shreyas Iyer interrupted saying that he should get the credit for Deepak’s feat since he had taken a decisive catch of Mustafizur Rahman without which Deepak wouldn’t have created the history in the match. “I should also get the credit for his five-wicket haul since I took that catch,” Shreays said.

Deepak thanked him for his contribution. “Thank you brother, thank you,” he said while shaking Shreyas’ hand.

WATCH: Hat-trick of sixes, Hat-trick of wickets & a card trick to top it up. This is yet another Chahal TV special. ?? @deepak_chahar9 @ShreyasIyer15 @yuzi_chahal – by @28anand

Earlier, Yuzvendra had taken six wickets by conceding 25 runs against England in a T20 International match in 2017.

On Sunday, India scored 174 runs in 20 overs after they were put to bat by Bangladesh. In response, Bangladesh were bowled out for 144. Deepak’s 6-7 bowling figure also included a hat-trick, which is the first by any Indian in a T20 International match. Deepak later revealed that he wasn’t aware of his hat-trick until he was told about his teammates.

With this win, India also won the series 2-1.