Australia on Thursday faced a spectacular batting collapse on day one of the first Test match against England in the ongoing Ashes series. But thanks to Steve Smith’s gutsy century that the Aussies were able to cross the 200-run mark after being reduced to 122/8. The other highlight of the first day’s play was umpire Aleem Dar being stung by a bee or a wasp. 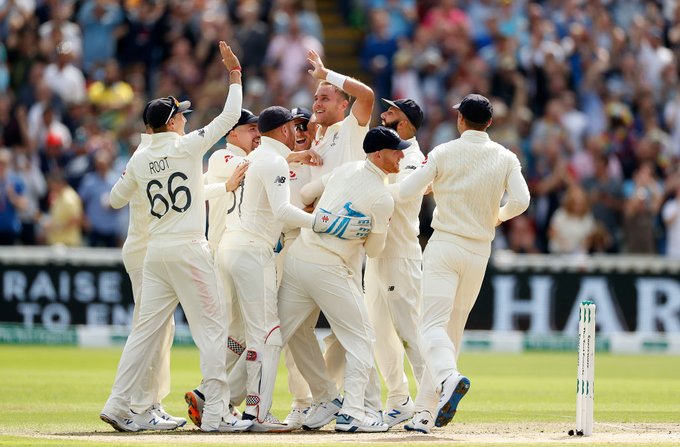 After winning the toss at Birmingham’s Edgbaston cricket ground, Australia decided to bat first. However, it soon lost its star opening batsman David Warner to a questionable umpiring decision. Much to the surprise of Aussie fans, Warner decided to not go for the review even though the visiting team had both their review options unused. The TV replay later showed that the delivery from Stuart Broad that got him out LBW was going to miss the stumps.

Warner’s departure opened a floodgate of sorts as no top-order Australian batsmen with the exception of Steve Smith and Travis Head could face the English bowlers as the tourists kept losing wickets at regular intervals. When Pat Cummins was adjudged LBW off the bowling of Ben Stokes, Australia were struggling at 122/8.

However, Smith and Peter Siddle then added a crucial 88 runs for the ninth wicket. Siddle was unlucky to not have completed what would have been an impressive fifty. He got out off Moeen Ali’s bowling for 44. Smith went on to score a fantastic century, 24th of his Test career. The player broke down in tears since this century came after a somewhat disappointing World Cup campaign, where he struggled with the bat. Smith got out for 144 as he added another 77 runs for the 10th wicket with Nathan Lyon. Australia were all out for 284 in the end. At the end of the first day’s play, England were 10 for no loss.

Stuard Broad was the pick of the English bowlers as he finished his spell with 5 wickets. This also meant that Broad completed his 100 wickets against Australia. Chris Woakes took three wickets while Stokes and Ali scalped one wicket each.

The first day’s play at Edgbaston was briefly disrupted by rains. The forecast for the next couple of days is also cloudy with chances of drizzles.

Umpire Aleem Dar was stung by a bee or a wasp, which prompted the players to go for an early drink break.