India’s golden girl Himas Das recently added one more Gold Medal on her European circuit, taking the number of Gold Medals won by her in July alone to five. Her extraordinary feat earned Das plenty of plaudits from all and sundry including Bharat Ratna Sachin Tendulkar, who called the girl from Assam an inspiration for all. Also congratulating Das was controversial baba Jaggi Vasudev, also known as Sadhguru. However, his tweet has set the internet on fire for all the wrong reasons. 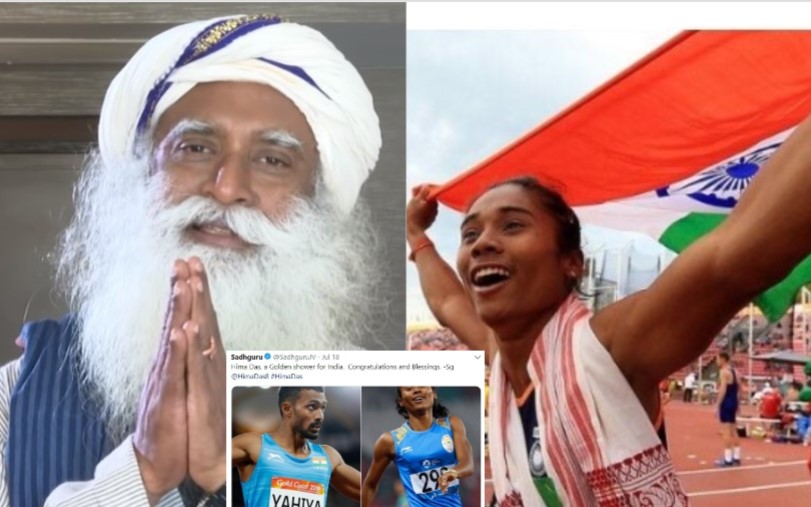 Vasudev, in his tweet, wrote, “Hima Das, a Golden shower for India. Congratulations and Blessings.”

No sooner did the controversial baba share his congratulatory tweet for the champion athlete, social media users began to hound him hinting at the kinky meaning of his tweet. They pointed out that the golden shower was a commonly used slang in sexual encounters. This is often referred to as the act of urinating on someone during sexual encounters.

User Priyashmita Guha wrote, “Delete your tweet you bloody moron.” User Suryanarayan Ganesh wrote sarcastically, “Guruji, May you enjoy many more golden showers too.” User ‘Ocean is Calling’ commented, “Hey you creepy!! Keep that golden shower blessings for the bhakhts and their families.” “This is precisely why you should not arm nincompoops with the internet,” wrote Abhishek Mukherjee.

Although some of Vasudev’s supporters made desperate attempts to defend the controversial baba, they were outnumbered. Aviral Sharma wrote, “Here’s what Golden shower actually means, get a life Leftists, you made it look so obvious! Just a day after Sadhguru was seen at Chandrayan’s launch, you took out a 6 days old tweet!”

Hima Das’ Gold rush for this month started on 2 July when she won Gold at the Poznan Athletics Grand Prix in Poland clocking a timing of 23.65s in the 200m category. Six days later, while taking part in the Kutno Athletics Meet, also in Poland, Hima won another Gold in the 200m race. What made her feat here special was that she was suffering from a sore back, but this did not stop her from winning laurels for her country yet again.

Hima had won her third Gold medal in the 200m race while participating in the Kladno Athletics Meet in the Czech Republic, clocking a timing of 23.43 seconds.