India avoided a complete batting collapse on Thursday thanks to a gritty 81-run innings by Ajinkya Rahane. The visitors were reduced to 203-6 at the end of the first day’s play with Rishabh Pant and Ravindra Jadeja batting at 20 and three respectively. 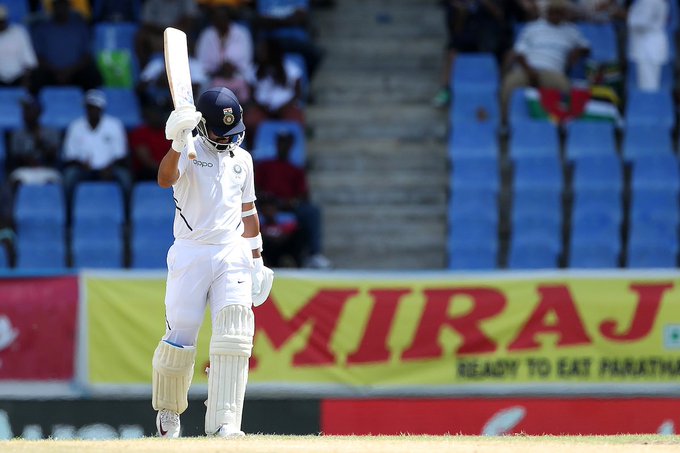 Batting first, India made a disastrous start as they lost their first three wickets for just 25 runs. Mayank Agarwal, Cheteshwar Pujara and Virat Kohli lost their wickets by scoring 5, 2 and 9 runs respectively. KL Rahul tried to give some respectability from the other end but he too departed by missing out on his fifty by 6 runs.

Rahane was the only batsman, who appeared set for a big total until he too fell at 81, missing his century by 19 runs. India’s biggest tormentor was Kemar Roach, who took 3 wickets, while Shannon Gabriel and Roston Chase picked up two and one wicket respectively.

Speaking after the end of the first day’s play, Rahane said that he wasn’t too concerned about missing out on his century. He said, “As long as I am at the crease, I am thinking about my team, I am not a selfish guy. So yes, I am not too concerned about the hundred as I thought 81 on that wicket was really crucial as we are now in a decent position.”

Rahane and Hanuma Vihari added 82 runs between them before Vihari was out for 32. When India’s top-scorer was out for 81 shortly after chopping back onto his stumps India were 189/6 and in real danger of being bowled out for less than 220.

But Pant and Jadeja then started a rearguard action in the last hour of the day. However, their effort was cut short as the rain-interruption brought the first day’s proceedings to end abruptly.