The uncertainty over the government formation in Maharashtra took a new twist on Tuesday after the country’s public service broadcaster Prasar Bharati reported that Governor Bhagat Singh Koshyari had recommended ‘President’s rule’ in the state. However, the government-owned broadcaster deleted the tweet before posting another tweet attributing the news to unnamed ‘sources.’ 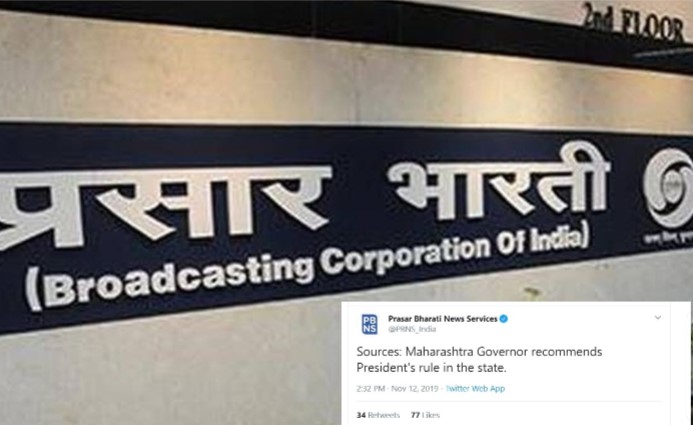 The news of Maharashtra Governor recommending President’s rule in the state came as a shock to many including the Nationalist Congress Party, which was asked to indicate its willingness to form government in the state by 8.30 PM on Tuesday night. Priyanka Chaturvedi of the Shiv Sena asked, “How can the honourable governor recommend President rule till the time given to NCP doesn’t lapse?”

A statement from the office of Maharashtra’s Governor read, “Governor of Maharashtra Bhagat Singh Koshyari having been satisfied that as Govt of Maharashtra cannot be carried on in accordance with the Constitution, has today submitted a report as contemplated by the provisions of Article 356 of Constitution.”

Moments later, President Ram Nath Kovind too gave his nod to the recommendation made by the central cabinet paving the way for the imposition of the President’s Rule in the state.

However, what left journalists puzzled was the manner in which Prasar Bharati had deleted its original tweet before attributing the news to ‘sources.’

if #Maharashtra Guv has given time till 8.30 pm to @NCPspeaks to stake claim,how can #Governor recommend #PresidentRule before that? This would be constitutional violation & it is Government mouthpiece @prasarbharati @PBNS_India peddling this. Some dirty game is on. @ShivSena https://t.co/nXuVuAXIAT pic.twitter.com/qVN8OnF2PJ

Koshyari had first asked the Shiv Sena to inform him about its willingness to form the government by 7.30 PM on Monday. He asked the NCP to do the same after the Shiv Sena asked for an extension of 48 hours.

Meanwhile, the Shiv Sena has reportedly approached the Supreme Court challenging the recommendation to impose President’s rule in Maharashtra.

Prasar Bharati was recently in the news after it issued a chilling warning to London-based Guardian newspaper to desist from ‘slanted reportage’ ahead of the Ayodhya verdict. The newspaper had merely reported that India was tense ahead of the Supreme Court’s verdict in the Babri Masjid-Ram Temple case.