Janta Ka Reporter 2.0
Home India Goa “We are making sure that there is no pollution issue in Goa”:...

Goa Chief Minister Pramod Sawant has bluntly told his Delhi counterpart, Arvind Kejriwal, to mind his own business and worry about tackling the rising air pollution in the national capital before commenting on the goings-on in the coastal state. This was after Kejriwal recently accused the BJP government of Goa of muzzling protests over environmental issues. 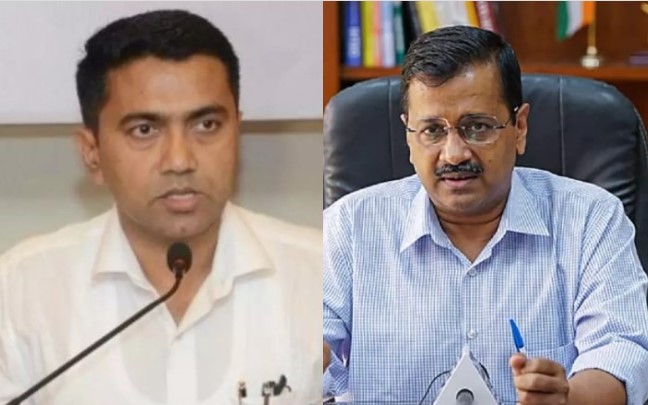 Kejriwal had tweeted on 9 November, “Goans camping day n nite to #savemollem and stop #coalprojects. FIRs done against many Goans incl AAP volunteers. Muzzling protests and lodging FIR will not dampen spirit of Goans to save Goa from being a coal hub. Govts shud not implement projects against the wishes of people.”

Reacting to the AAP leader’s tweet, Sawant told reporters on Wednesday that the Delhi chief minister should worry about his city-state where pollution had become a major concern. Sawant, according to news agency PTI, said, “I was in Delhi and returned just today. I have seen how bad the air quality is (in Delhi). He (Kejriwal) should be concerned about his own area before talking about Goa.”

Kejriwal, who’s been unsuccessfully trying to spread his party’s wings to Goa, tweeted, “@DrPramodPSawant Its not abt Delhi’s pollution vs Goa’s pollution. Both Delhi and Goa are dear to me. We are all one country. We all have to work together to ensure there is no pollution in both Delhi and Goa.”

Sawant replied, “Dear CM @ArvindKejriwal ji, we are making sure that there is no pollution issue in Goa and our Govt will ensure that our state remains pollution free. I am sure the people of Delhi also want the same in their beautiful state.”

Dear CM @ArvindKejriwal ji, we are making sure that there is no pollution issue in Goa and our Govt will ensure that our state remains pollution free. I am sure the people of Delhi also want the same in their beautiful state. https://t.co/tUHU2wqmdV

Kejriwal’s party had fielded candidates from all 40 seats in Goa during the 2017 assembly polls, but faced a humiliating rejection from Goans as the AAP failed to win a single seat.