A man calling for Hindu Rashtra in India where Muslims were not welcome was thrashed on Wednesday. The cops have arrested two individuals including one juvenile after the video of Manjunath being thrashed at a mall in Karnataka’s communally sensitive Mangaluru went viral on social media platforms. 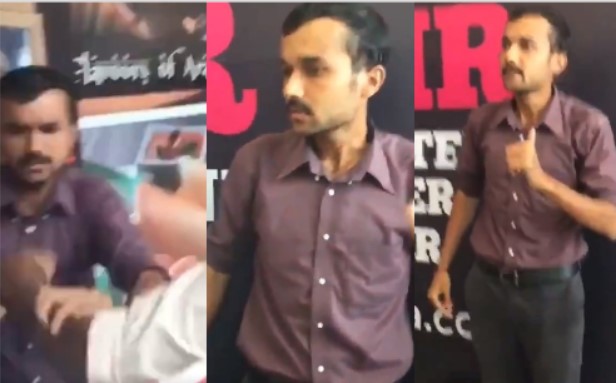 In the viral video, Manjunath is seen advocating for Hindu Rashtra prompting angry people to thrash him inside the mall. The proponent of Hindu Rashtra later filed a police complaint at Pandeshwar police station after being thrashed by an angry public.

Mangaluru Commissioner of Police PS Harsha urged media to desist from sensationalising the incident. NDTV quoted him as saying, “There’s no need to sensationalise the issue. We have registered a case against the attackers, and a search is on to track all the suspects.”

Harasha was recently appointed as the new Police Commissioner of Mangaluru by Chief Minister BS Yediyurappa.

The arrested individual has been identified as one M Safwan, who has been booked under relevant sections of the Indian Penal Code. Police said that the action will be taken against the juvenile under the Juvenile Justice Act.

Mangaluru has been a communally sensitive city of Karnataka with militant Hindu outfits often seen resorting to violence to disturb law and order. In 2009, a group of 40 people from one Sri Ram Sena had brutally attacked young women and men in a pub in the city.

In 2015, at least 30 people were injured and property worth lakhs of rupees were destroyed after clashes between Hindus and Muslims near Mangaluru in Karnataka. This was after over 25,000 Hindutva activists converged for a meeting.