The Election Commission on Monday said that it had arrested a polling agent from Faridabad after a video of ‘booth capturing’ went viral. In the video, a man was seen forcibly stopping a group of women from casting their votes. Instead, the man was seen forcing his will while pressing the button on the EVM. 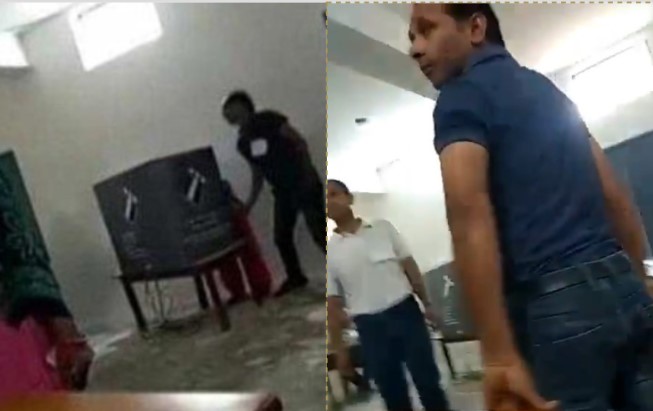 The video evoked angry reactions from activists and journalists with an overwhelming majority demanding the cancellation of polling even though no one had a clue about the polling booth in question.

On Monday, the national poll body confirmed the allegations of booth capturing and said that the District Electoral Officer of Faridabad had confirmed the arrest of the man, seen indulging in electoral malpractices in the video.

Quoting a statement from the Election Commission, news agency ANI reported, “DEO Faridabad has reported that a polling agent was arrested yesterday and FIR has been lodged. He was trying to effect at least three women voters. Observer visited the booth at Asawati in Prithla constituency of 10, Faridabad PC. He is satisfied that voting was never vitiated.”

Delhi Commission for Women’s chief, Swati Maliwal, wrote, “This should be investigated! This man needs to be arrested!.” Maliwal’s husband and AAP leader, Naveen Jaihind is contesting from Faridabad.

This should be investigated! This man needs to be arrested! https://t.co/PMmGgQNwMA

Shameful! But @ECISVEEP will now want this video taken down instead of taking action! Shame of democracy! https://t.co/pN6Dq7SxUV

This time it’s NOT the people who decide which party gets the mandate to form next government.

It seems he has been arrested, but the Poll booth voting has not been cancelled.

This is the video that Election Commission doesn’t you to watch:-