The BJP on Monday lashed out at the Telugu Desam Party and Andhra Pradesh Chief Minister N Chandrababu Naidu for making fun of Prime Minister Narendra Modi’s humble background as a tea seller. 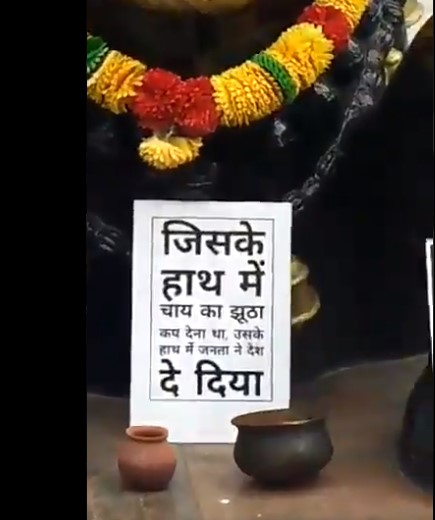 Taking to Twitter, BJP’s IT cell chief Amit Malviya posted a video showing a placard placed at the venue of Naidu’s one-day hunger strike making fun of Modi’s chaiwallah background. The placard, according to Malviya’s video, read, “the one whop should have been handed a used cup in his hand, we gave the control of this country in his hand.”

TDP MP Jayadev Galla told news agency ANI that his party did not ‘endorse’ such action. He said, “It is not correct and it should not be done. It must not have been put by our party people.”

Naidu is staging a one-day hunger strike demanding a special status for his status, which was promised by the Centre during the bifurcation of the state in 2014. Several prominent opposition leaders visited him at the Andhra Bhawan to express their solidarity. Notable among them were Congress President Rahul Gandhi, National Conference’s Farooq Abdullah and NCP’s Majeed Menon. West Bengal Chief Minister Mamata Banerjee too extended her support to Naidu’s fast.

Earlier on Monday, Naidu visited Rajghat to pay his tribute to Mahatma Gandhi before starting his hunger strike.

Naidu’s TDP had fought the 2014 Lok Sabha polls together, however, he parted ways with the saffron party last year. Prime Minister Narendra Modi had launched a scathing attack against Naidu on Sunday, when he accused him of backstabbing his father-in-law NT Rama Rao.