Two prominent Congress leaders namely Shatrughan Sinha and PC Chacko provided the much-needed ammunition to the BJP with their controversial statements in the crucial election season. 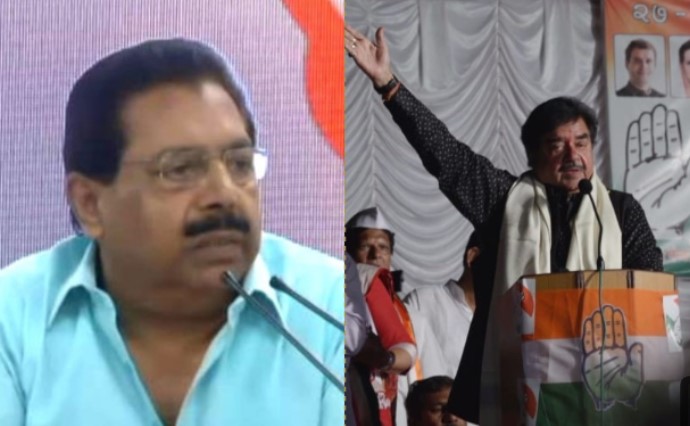 Addressing an election rally in Madhya Pradesh’s Chhindwara, Sinha said that the Congress was a party of Mahatma Gandhi and Mohammed Ali Jinnah among others. In the video gone viral now, Sinha could be heard saying, “This Congress party, from Mahatma Gandhi  to Sardar Patel to Mohammad Ali Jinnah to Jawaharlal Nehru to Indira Gandhi to Rajiv Gandhi to Rahul Gandhi to Netaji Subhash Chnadra Bose. This is their party. They played a key role in the country’s development and freedom.”

Faced with criticism, Sinha, who recently left the BJP to join the Congress, told ANI that it was a slip of tongue adding that he meant to say Maulana Abul Kalam Azad but ended up mentioning Mohammed Ali Jinnah’s name. Jinnah, a Muslim League leader, was responsible for the creation of Pakistan.

Another Congress leader causing embarrassment to the party was AICC General Secretary in-charge of Delhi, PC Chacko, who extended his support in favour of the separatist Kashmiri leader Yasin Malik. He told news agency ANI, “If Pragya Singh Thakur, a convicted person, an accused person, can contest an election, and in the name of separatism, Delhi is asking him (Yasin Malik) at gun point to surrender, anyone with self respect will react the way Mr Yasin Malik did.”

The news of Malik’s deteriorating health under the custody of the NIA has caused a shutdown in parts of Srinagar in Jammu and Kashmir. Many felt that Chacko’s comments supporting Malik was a perfect fodder to the BJP, which has been runnings its election campaign by invoking nationalism.

One can only marvel at how Congress survives on despite such an artillery of human bombs.. https://t.co/9UtcNMnOls

Does Congress leader PC Chacko realise Yasin Malik is the alleged killer of 4 Indian Air Force (IAF) personnel in Srinagar? He is also accused of masterminding the GENOCIDE of Kashmiri Pandits in the Kashmir valley. Shatrughan Sinha praises #Jinnah, Chacko soft on Yasin. Why? https://t.co/WGlBsFL1G2

PC Chacko’s contribution to the Congress is for everyone to see in his handling of New Delhi. And now in the middle of the election- when the BJP is running a high pitched Nationalism campaign- PC Chacko’s horrible statement of support in favor of terrorist Yasin Malik comes. ?‍♀️

Meanwhile, JKLF chief Yasin Malik in Jammu will now face trial in two nearly 30-year-old cases relating to gunning down of IAF personnel and the Rubiya Syed kidnapping, with the Jammu and Kashmir high court striking down a 2008 order that had transferred their hearing to Srinagar, reported PTI.

Malik is presently lodged in Tihar jail in New Delhi after being arrested by the NIA in a case related to financing of terror and separatists organisations.