Bihar’s Deputy Chief Minister Sushil Kumar Modi has sensationally claimed that the sale of Parle-G was down in India because poor were now eating expensive pastries. He also blamed India’s corporate lobby for manufacturing the narrative over the current economic slowdown in the country. 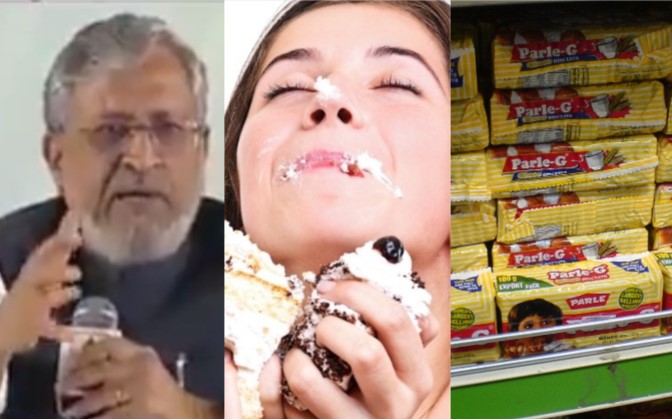 Modi, also a veteran BJP leader, said at an event organised by ABP News, “If people have started eating pastries more and that has brought down the sale of Parle-G, then I don’t know.” He, however, said that sales of Parle-G had increased in a ‘poor state like Bihar.’

Last month, Parle Products Pvt Ltd had said that it will be forced to lay off 10,000 staff because of the slump in the sales of its affordable biscuit brand, Parle-G. “The situation is so bad, that if the government doesn’t intervene immediately … we may be forced to eliminate these positions,” Mayank Shah, category head at Parle, had told Livemint website.

The company had said that because of higher GST, it was forced to pack fewer biscuits in a Parle-G pack, thereby impacting its sales.

Modi had recently said that the economic slowdown was not alarming since it was natural for sales of items to go down in Saawan and Bhado (two Hindi months).

Ever since the 5% GDP data for the first quarter of 2019-20 officially confirmed that the Indian economy had slowed down considerably, several ministers of the Indian government have been found to be making bizarre statements to justify the economic recession.

It started with Finance Minister Nirmala Sitharaman astonishingly blaming Ola and Uber taxi services for the slump in the automobile sector. If that was not enough, then her cabinet colleague and commerce minister, Piyush Goyal, lashed out at the critics of his government by crediting Albert Einstein with discovering gravity. As expected, both Goyal and Sitharaman faced incessant social media roasting for their perceived outrageous comments justifying the economic slowdown.