Self-proclaimed yoga guru Ramdev has once again found himself in a spot of bother after a new video showed him ridiculing corona warrior doctors and vaccines. Another cringe-worthy aspect of Ramdev’s new video was how his disciples, supposedly educated men and women, laughed on their yoga mats as the controversial godman mocked doctors. 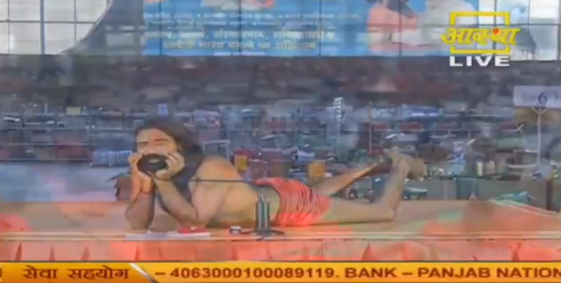 Ramdev did not stop here as he continued, “If you want to become a doctor, then be like Swami Ramdev, who doesn’t hold any degree but is everyone’s doctor. Without any degree, with divinity and dignity, I am a doctor.”

1) Ramdev says more than 1000 doctors have died in India after taking 2nd dose of vaccination. Is this true @drharshvardhan? If so, why has this not been made public.

On what basis he is calling himself a doctor who can treat Covid19?
pic.twitter.com/x0hWRhOYOR#ArrestThugRamdev

Ramdev’s disciples, who were listening to the controversial godman’s tirade against doctors, were seen luaghing at his jokes even at the expense of those having sacrificed their lives in frontline duty.

The Indian Medical Association had recently served a legal notice to Ramdev after making fun of allopathy medicine. Health Minister Harsh Vardhan, who had earlier promoted Ramdev’s ‘coronil’ product, was forced to issue a public statement in a bid to publicly admonish Ramdev.

Faced with public backlash, Patanjali had issued a statement saying that Ramdev’s statement was taken out of context. According to Patanjali, Ramdev harboured ‘no ill-will against modern science and good practitioners of modern medicine.’