Prime Minister Narendra Modi on Tuesday broke protocol to greet the Saudi Crown Prince Mohammed Bin Salman, also known as MBS, with a passionate hug at the Delhi airport. MBS, not a head of the state, arrived in Delhi from Pakistan on a two-day visit to India before he leaves for China. 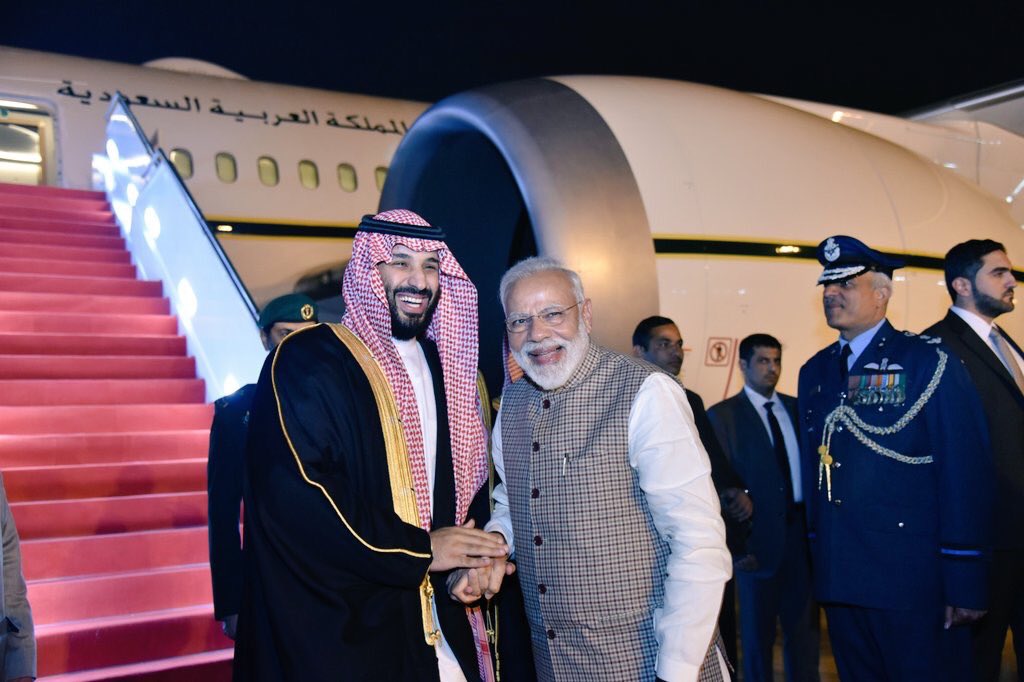 The video of Modi passionately hugging MBS, who had signed $20 billion worth agreements with Pakistan before arriving in India, was shared by news agency ANI. No sooner did the news agency post the video of the Modi-MBS hug, the Indian prime minister began to face incessant criticism from former diplomats and journalists for breaking the established protocol as well as the glaring hypocrisy on his stand on nationalism.

In the video, Modi is seen desperately waiting for MBS to walk down the stairs of the plane so that he could hug him in his inimitable style. Both leaders then posed for the camera, where the Indian prime minister was seen posing with a broad smile. India’s Ministry of External Affairs posted the photo from its official Twitter account.

A new chapter in bilateral relations

Former diplomats and journalists took objection to Modi breaking the protocol for a Crown Prince by travelling all the way to the airport because of the statements made my MBS during his Pakistan visit. While in Islamabad, MBS had told the country’s Prime Minister Imran Khan that he was ‘Pakistan’s ambassador in Saudi Arabia’ adding that he could never say ‘no to Pakistan.’ This was in response to Khan’s passionate plea to MBS to look after Pakistani labourers, 2.5 million of them, working in Saudi Arabia.

Reacting to the Modi-MBS hug, former Indian diplomat KC Singh tweeted, “Disappointed! When PM of a great democracy hugs, breaking protocol, a princeling with murder taint who’s just written a cheque to a quasi-military regime in Pakistan, with blood of Indian troops on its hands, one feels so small.”

Journalist Sreenivasan Jain commented sarcastically, “Befitting response to someone who pledged $20 bn. in deals to Pakistan. (And asked to be considered Pak’s ambassador to Saudi.)”

Journalist Swati Chaturvedi tweeted, “This picture upsets me. This man has just given 20 billion to Pakistan which will be used to finance terror against us. 2 This man issued a disgraceful joint statement with Pakistan. 3 Modi’s NSA’s son has his family member as a partner.”

Journalist Abhisar Sharma felt that Modi should have snubbed MBS in light of his support to Pakistan soon after the latter’s role became questionable in the last week’s Pulwama terror attack. He wrote, “I think @PMOIndia should have snubbed him by not going to recieve him in the airport like we did to the Canadian PM. Why did Modiji go and recieve the Saudi guy? He insulted usbin Pulwama and our concerns ?”

Modi himself had launched a tirade against Pakistan after a suicide bomber killed 45 CRPF soldiers in Pulwama. Speaking in Jhansi, Modi had vowed to teach Pakistan a lesson. His social media foot soldiers had given grief to Congress minister Navjot Singh Sidhu for hugging a Pakistani general last year. They ran a campaign on Twitter demanding his ouster from The Kapil Sharma Show. The show’s host Kapil Sharma had lashed out at the BJP IT Cell for attempting to divert people’s attention from the real issue.