The Election Commission of India, which has often faced criticism for biases in favour of the BJP, has once again found itself in the middle of a full-blown controversy after it sensationally reduced the 48-hour ban imposed on Assam BJP leader Himanta Biswa Sarma to 24 hours. The Congress, as expected, called the development a ‘dark day in democracy.’ 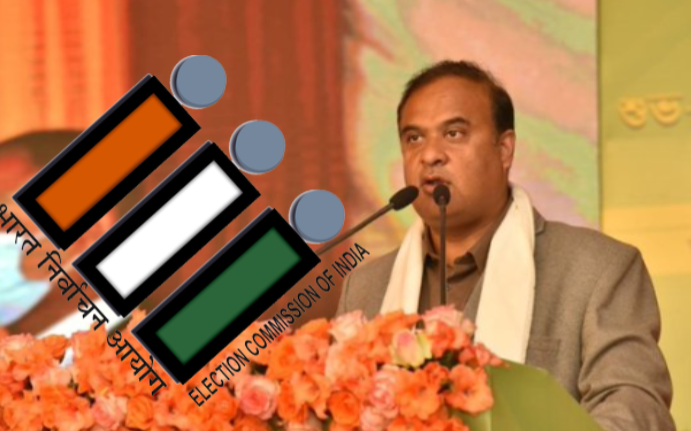 The national poll panel, in its revised order, reduced the period of debarment from election campaign from 48 hours to 24 hours ‘to the effect that permission may be granted for holding any public meetings, public processions, public rallies, road shows, by the concerned district administration authorities, where you are expected or likely to participate.’

Earlier, the Election Commission had banned Sarma from campaigning for 48 hours after it found him guilty of an election code violation. Sarma had allegedly made threatening remarks against Bodoland People’s Front chief Hagrama Mohilary, threatening him to be sent to jail by the NIA if the BJP returned to power.

The third and final phase of assembly elections in Assam is scheduled to take place on 6 April, for which the campaigning would end on 4 April. Sarma would not have been able to take part in the campaigning any longer had the Election Commission not reduced his ban.

The Election Commission is now facing widespread criticism with many accusing the poll body of being exposed for its brazen biases in favour of the BJP. Others drew a parallel with the Election Commission’s 48-hour ban for DMK’s A Raja in Tamil Nadu. The national body has not reduced his ban period.

One rule for DMK’s A. Raja, another for Himanta. Good of you, @SpokespersonECI https://t.co/iq9Nszx7h2

A dark day for Parliamentary democracy.

#ECI doesn’t even have the guts to sustain its own order. Deplorable that EC buckles under Modi Govt’s pressure & reverses its own order of ban on Sh. Himanta Biswa Sarma.

History will neither pardon #ECI nor #BJP for this sin.
1/2 pic.twitter.com/gKY4UUqZvu

After slapping a 48 hour campaigning ban on @himantabiswa y’day to deflect attention from EVMs in a BJP candidate’s car, the EC has just made a u-turn & reduced the ban to 24 hrs.

Which means Himanta can start campaigning again this evening.

How much more brazen can it get?

The Election Commission on Thursday had said that DMK leader and former Union Minister A Raja had violated the Model Code of Conduct and banned him from campaigning for 48 hours in the ongoing assembly polls.