Days after the state’s BJP administration imposed its ban on Muslim employees working in MNCs in Noida from using public parks for Friday prayers, another firm has emerged as an example of religious tolerance after it provided space to over 60 women to carry out their weekly religious duty.

On 11 January, 60 women employees were provided with a space by a firm in the A-block of Sector 64 of Noida to offer Friday prayers. One of the woman devotees said that the company provided them a break of one hour between 1 pm and 2 pm every Friday for prayers and lunch.

“On Fridays, the terrace of the factory is divided into two parts, where on one, men assemble and on the other, us women employees, to offer namaz every Friday. Our company has also arranged for mats, mattresses and an Imam to assist the namazees,” a woman employee, not willing to be named, told Hindustan Times.

The said company is believed to be an example for its religious tolerance. Farid, an employee with the company, said that he had been working here for the last 13 years. He told Hindustan Times that he has witnessed a culture where ‘while Muslim employees are given space on Friday, Bhajans are organised during Navratras for the Hindu employees.’

This has come just days after an owner of a hosiery company in Sector 58 had become a hero last month by offering the rooftop of his company to its Muslim employees for Friday prayers. The owner, who had requested to remain anonymous, had said that while 35-50 people offered Friday prayers in the past, there were 70-80 people present after the ban by the state’s BJP government to offer namaz on the company’s office rooftop. 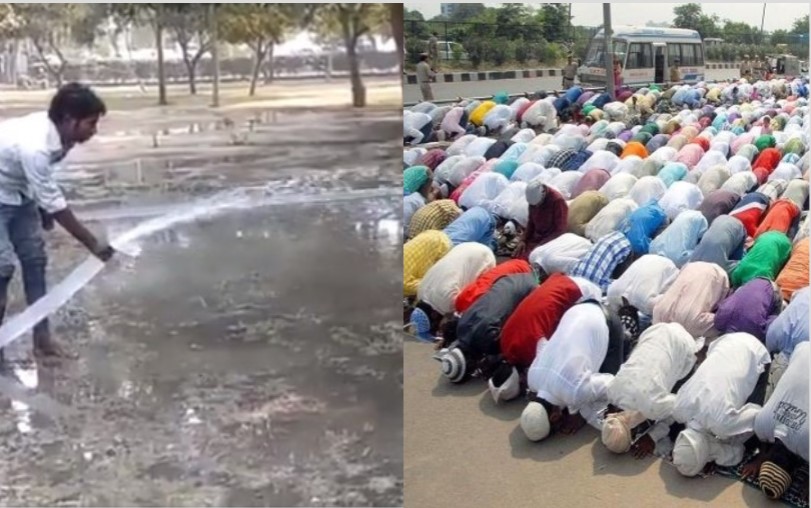 As if the controversial circular to MNCs asking them to stop Muslim employees from offering Friday prayers in the local park was not enough, the authorities had filled the park in Sector 58 with water on the day of Friday prayers last month. This was to ensure that no Muslim devotees could make fresh attempts to offer prayers this Friday.

the Noida Police had sent a controversial circular to Multi-National Companies in and around Sector 58 to stop their employees from offering namaz in the local park, owned by the Noida Authority.