NEET PG 2021 Exams: After CBSE and UP Board exams, the Indian government has postponed the NEET PG Exams 2021 in view of the surge in COVID-19 cases. Details can be accessed from the official website of NEET at  ntaneet.nic.in. 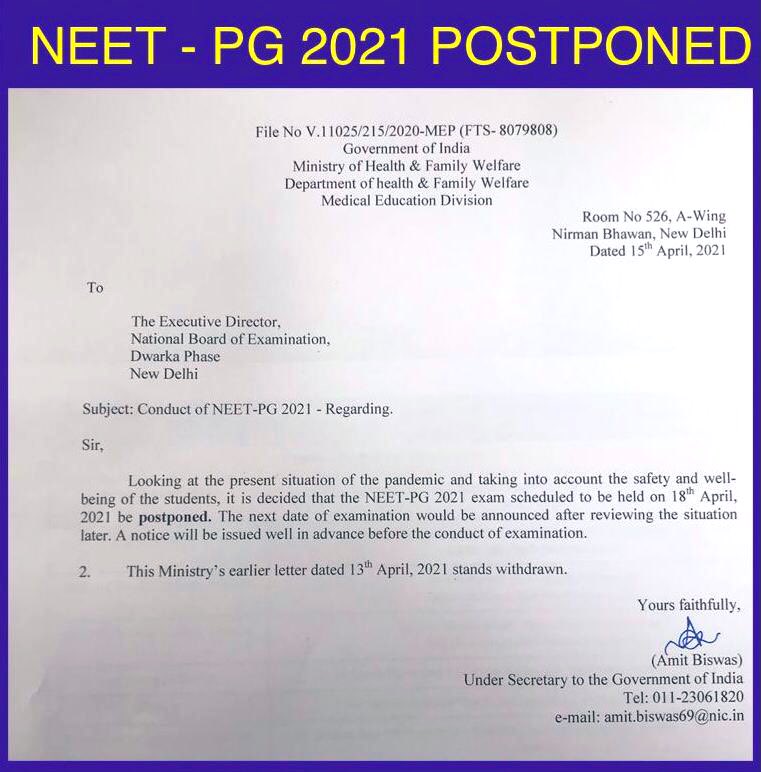 Union Health Minister Harsh Vardhan took to Twitter to announce, “In light of the surge in #COVID19 cases,GoI has decided to postpone #NEETPG2021 exam which was earlier scheduled to be held on Apr 18 Next date to be decided later. Decision has been taken keeping wellbeing of our young medical students in mind.”

His subsequent tweet read, “#NEETPG2021 POSTPONED ! Health & safety of our young doctors is paramount. Next date to be decided after reviewing the situation later.”

Earlier, the CBSE had announced that it was cancelling Class 10 exams while also postponing the Class 12 Exams. This was followed by a similar decision by the UP government on this year’s board exams.

National Testing Agency (NTA) has been established as a premier, specialist, autonomous and self-sustained testing organization to conduct entrance examinations for admission/fellowship in higher educational institutions.
To assess competence of candidates for admissions and recruitment has always been a challenge in terms of matching with research based international standards, efficiency, transparency and error free delivery. The National Testing Agency is entrusted to address all such issues using best in every field, from test preparation, to test delivery and to test marking.