An agricultural scientist in Punjab has refused to accept an award from Union Chemicals and Fertilisers Minister DV Sadananda Gowda to express his solidarity with farmers, currently protesting against the controversial Farm Laws. In the viral video, Varinderpal Singh, who’s the principal soil chemist at the state-funded Punjab Agricultural University, is seen refusing to accept the award. 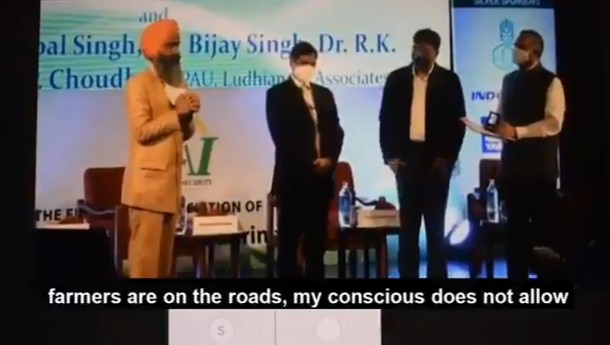 Singh can be heard saying, “I have a humble submission that at this time of crisis for the nation, when our farmers are on the road, my conscience does not allow me to accept this award. I wish we can work together for the nation and the government can listen to our dear farmers.”

Singh goes on to add that his work as a scientist has always ben focussed on India’s farmers, adding that he would be ‘guilty if at this moment’ he receives this award.

Dr Varinder Pal Singh of PAU Ludhiana refused to accept a gold medal and Golden Jubilee Award for Excellence from the Chemical and Fertiliser minister while registering his support for the farmers’ protesting against the new farm laws. https://t.co/xTrCPbGJ7r#isupportfarmers pic.twitter.com/g9nE9oXSeB

Singh has reportedly written to Prime Minister Narendra Modi repeating his stand on why he chose to decline the award. “My (conscience) does not allow me to receive this award from any government official because of unnecessary pains given by the GOI to the peacefully protesting farmers,” The Telegraph quoted Singh’s letter to PM Modi.

Tens of thousands of farmers are currently camping at the Delhi-Haryana border to demand the withdrawal of the three Farm Laws passed by the Indian parliament. They say that the laws have been passed to only help certain business houses, believed to be friends of Prime Minister Narendra Modi.

The government, for its part, says that the laws will help boost the income of Indian farmers.