President Ramnath Kovind has ordered the transfer of Justice S Muralidhar, who slammed Delhi Police and Modi government’s lawyer for the carnage in the national capital, to Punjab and Haryana High Court. The Supreme Court had recommended his transfer on 12 February.

The order on Justice Muralidhar’s transfer read, “In exercise of the power conferred by clause (1) of Article 222 of the Constitution of India, the President, after consultation with the Chief Justice of India, is pleased to transfer Shri Justice S. Muralidhar, Judge of the Delhi High Court, as a Judge of the Punjab and Haryana High Court and to direct him to assume charge of his office in the Punjab and Haryana High Court.” 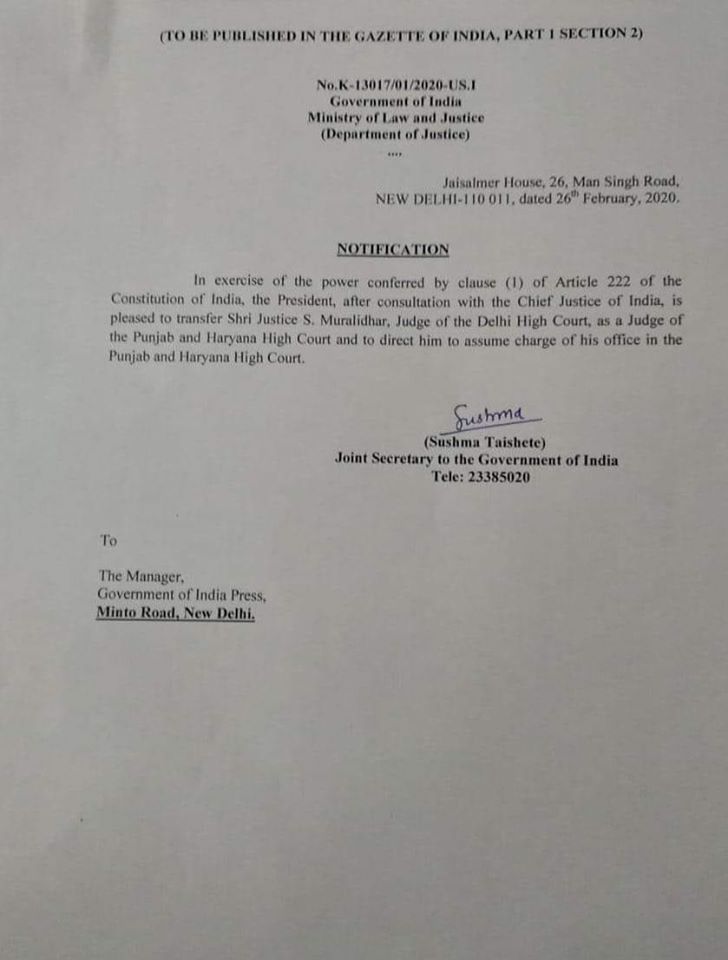 Justice Muralidhar had made scathing observations against the Delhi Police and Solicitor General Tushar Mehta, for the deteriorating law and order in Delhi where 25 people have been killed in the ongoing riots.

On his last day as the judge of the Delhi High Court, he had passed key orders on the ongoing riots in Delhi. At a midnight hearing at his residence, he had ordered the Delhi Police to provide safe passage to victims of the riots, trapped in Al-Hind hospital in Mustafabad, to other hospitals with better facilities.

On Wednesday, Justice Muralidhar had said that the bench comprising him and Justice Talwant Singh ‘could not ‘let another 1984 scenario happen in this city; not under the watch if this court.’ His bench had also directed the Delhi Police to take a decision on the filing of FIRs against BJP leaders, Parvesh Verma, Abhay Verma, Anurag Thakur and Kapil Mishra, for making inflammatory speeches.

Justice Muralidhar, who was the third senior-most judge in the Delhi High Court, will be remembered for doing away with the convention of judges being addressed as ‘Lordships.’

He had also headed the bench that convicted the members of the Uttar Pradesh PAC (police) in the Hashimpura massacre case.

Justice Muralidhar is known for delivering bold verdicts on communal violence and civil liberty. In 2018, judgments authored by him had hit media headlines on several occasions. They included the arrests of intellectuals and activists including Gautam Navlakha, who was arrested by the Pune Police for his alleged links with Maoists.