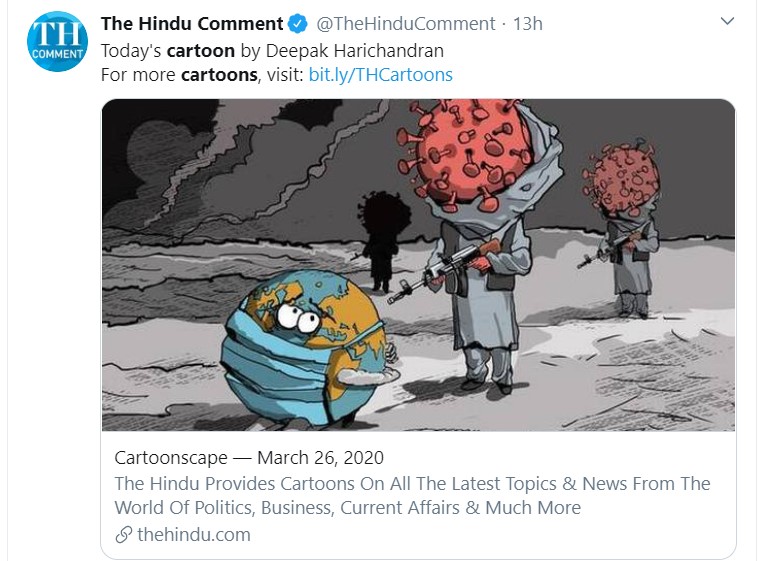 In the original cartoon, the newspaper had shown coronavirus as a terrorist posing danger to world population. What enraged social media users was the paper’s decision to have the virus dressed in a Pathani suit, which is often worn by Muslims in South Asian countries such as Afghanistan, Pakistan and even India.

Here’s how social Twitterati reacted to The Hindu’s cartoon:

It seems @the_hindu also believes in ‘you can recognise them by their dress’.

RT if you support this demand pic.twitter.com/CHoExyGKLt

Saw this on my TL- the editorial cartoon of @the_hindu

The Corona catastrophe is depicted as Muslim men in Pathani suits pointing their assault rifles to the earth.

What an utterly shameless, bigoted publication colouring a pandemic with filthy propaganda!

The aesthetic fetishes of the Indian majority conscious is satisfied only when Muslims are portrayed as the bad and evil.
/Cartoon from The Hindu/ pic.twitter.com/t2yhlyRS5r

This cartoon published by @the_hindu is nothing short of a hate crime. The virus is dressed in a Muslim attire. This is highly islamophobic. This issue is already furthering xenophobia, do not use it to further religious intolerance.
Apologize now! pic.twitter.com/7Sb1boT4eP

Faced with outrage, the newspaper deleted the controversial cartoon and replaced it with a ‘neutral representation.’ The paper also issued a clarification denying the allegations of Islamophobia. It said, “Some readers have objected to the cartoon published on March 26, 2020 as Islamophobic. Any link to Muslims in the attire of the virus was completely unintentional. The point of the cartoon was to show the world being taken hostage by the virus. However, we agree that the virus should have been shown as just a blob or a stick figure and we express our regret for the hurt or unhappiness caused. Accordingly, we are taking down this cartoon online and replacing it with one that has a neutral representation of the attire.”